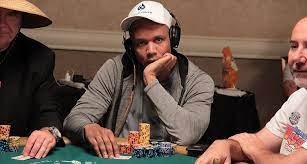 The poker world is now officially on high alert. Phil Ivey has chips in the World Series of Pokermain event!

Ivey, the ten-time bracelet winner and poker hall of famer who has spent the better part of the last five years fighting casinos in court over baccarat winnings, only recently returned to the felt. He won a combined $2.27 million in Montenegro at the Triton Poker Super High Roller Series in May, before taking ninth in the $50,000 WSOP Poker Players Championship.

Now, the 41-year-old is looking to go deep in the $10,000 main event, bagging up one of the biggest stacks in the room during day 2C at the Rio on Friday. Ivey, who last cashed in the WSOPmain event back in 2014 (430th), is looking to improve upon his personal best of seventh place, which he accomplished back in 2009, earning $1.4 million. He finished play with 434,200, which was good enough for 11th in the flight, and 26th overall entering day 3.

One of the few players to top Ivey’s performance during the day was Reedley, California farmer Ignacio Sanchez, who bagged up a whopping 627,200 to lead the field. Sanchez, who has cashed in the main event once before, will take 313 big blinds with him into day 3. At the start of play, there were still 3,480 players remaining in the flight. But by the end of the day, which consisted of five, two-hour levels, just 1,655 had survived. They will join the remaining players from day 2AB, combining for day 3 with 2,786 total remaining. Only the final 1,182 players will make the money, earning a minimum payout of $15,000.

The tournament resumes Saturday at 11 a.m. PT with another five levels scheduled. Check out the overnight chip counts here.