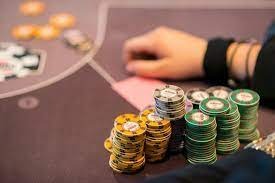 Scott Clements has a unique poker origin story, having been so infatuated with the game that he overpaid for his buy-in into the sold-out World Poker Tour Canadian Poker Open event. Despite the bad bankroll management decision, he managed to lead the tournament wire-to-wire and emerge with a win. That tournament gave him an automatic entry fee into the WPT North American Poker Championship, which he also won, this time banking $1.45 million.

In addition to his two WPT titles, Clements also has two World Series of Poker bracelets. He earned the first in the 2006 $3,000 Omaha eight-or-better event, and the second in the 2007 $1,000 pot-limit Omaha event. The Washington-native has come incredibly close to more bracelets in the years since, with numerous final tables and six runner-up finishes. In total, the 37-year-old poker pro has nearly $7.8 million in lifetime live tournament earnings, along with another $4 million or so won online.

Highlights from this interview includes a strict gym regimen, buying a house while still in school, cards games with family, expensive nights of 4-5-6, hosting the home game without knowing the rules, running up his first online deposit, getting knocked out by Maria Ho in his debut, a disputed WPT win, buying into a sold out tournament, ignoring the money on a seven-figure score, an early knack for Omaha, where he keeps his bracelets, dealing with close calls at the WSOP, the 100 McNugget challenge, how he backed into a piece of Martin Jacobson’s main event win, where he got his work ethic from, flipping drug houses for profit, and the many ways he has earned stitches.

Catch up on past episodes featuring notables such as Doyle Brunson, Daniel Negreanu, Justin Bonomo, Nick Schulman, Barry Greenstein, Michael Mizrachi, Bryn Kenney, Mike Sexton, Brian Rast, Freddy Deeb, Joe Cada, Chris Moneymaker, Maria Ho and many more. If you like what you hear, be sure to subscribe to get the latest episodes automatically when they are released.