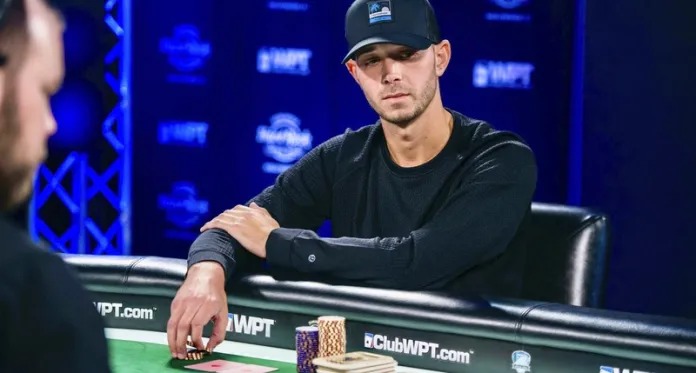 Jake Ferro has won the World Poker Tour Season XIX Player of the Year award thanks to a deep run in the final WPT main event of the year. Ferro was already a top contender heading into the 2021 WPT Five Diamond World Poker Classic, but the 300 rankings points he earned for finishing 14th from a field of 716 entries in that $10,000 buy-in event was enough to see him surge into the lead and secure the POY title.

“The WPT Player of the Year race came down to the wire and Jake’s determination in the final event makes him a fantastic winner,” said World Poker Tour CEO Adam Pliska. “It was an exciting way to close out Season XIX and certainly raises the bar for what will be a historic 20th anniversary season.”

Ferro cashed for a total of $669,540 across three in-the-money finishes in WPT main events, with the largest score being the $573,605 he earned as the runner-up in the 2021 WPT Seminole Rock ‘N’ Roll Poker Open. He navigated his way through a massive field of 1,566 entries in that $3,500 buy-in event in lat November to earn that career-best payday of over half of a million dollars. The score also earned him 1,2000 crucial WPT POY points.

“I’m thrilled to have won WPT Player of the Year for Season XIX and am definitely looking forward to playing more World Poker Tour events in 2022,” Ferro told WPT reporters. “It would have been a dream come true to have etched my name on the Mike Sexton WPT Champions Cup, but coming so close only makes me hungrier for the coming season.”

Ferro was awarded a WPT Passport worth $15,000 for entries into Season XX events, as well as complimentary accommodations and ground transportation at WPT events.

Ferro’s third cash on the tour this season came when he finished 39th in the WPT Seminole Hard Rock Tampa $3,500 buy-in main event back in June. He earned $15,690 and 50 points for that deep run. That event was ultimately won by three-time WPT champion Brian Altman, who finished fourth in the final standings for Season XIX.

The WPT will kick off its next season later this month at the Seminole Hard Rock Hotel & Casino, with the WPT Lucky Hearts Poker Open $3,500 buy-in main event set to run from Jan. 21-26.