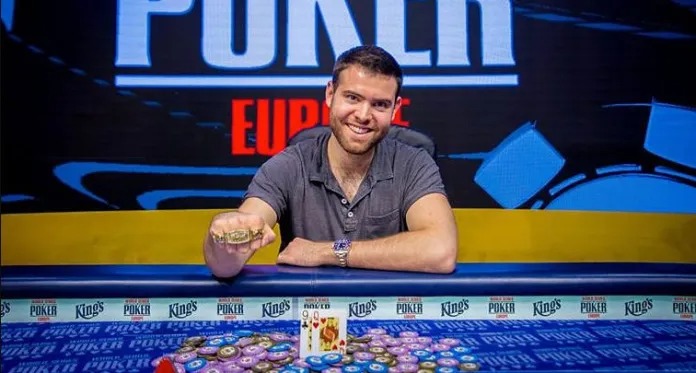 British poker pro Jack Sinclair has won the 2018 WSOP Europe €10,350 buy-in no-limit hold’em Main Event for €1,122,239. This event attracted a total of 534 entries to just surpass the €5,000,000 guarantee. After five full days of action that sea of players was narrowed down to just six, with Laszlo Bujtas as the chip leader, 2013 WSOP main event champion Ryan Riess in third chip position and Sinclair in fourth.

“I wasn’t thinking about it,” Sinclair told WSOP reporters when asked if the 2017 WSOP main event in Las Vegas was on his mind in this event. “It was a completely different tournament. Vegas was huge for me but it’s in the past now and I don’t think about it now. Vegas was my first ever time playing a $10k and the first time in Vegas in general. The whole thing has been so surreal from the start of my poker career until now. I’m not used to it really, but… I don’t wanna get used to it!”

Ihor Yerofieiev was the first to hit the rail, losing a preflop race against Milos Skrbic to finish sixth for €175,965 ($277,976 USD). Skrbic ran pocket queens into Sinclair’s pocket aces not long after that to fall to the short stack. He was eliminated not long after that, getting all-in preflop with the KDiamond SuitJHeart Suit and failing to overcome the ASpade SuitQClub Suit of Laszlo Bujtas. Skrbic took home €241,718 ($277,976 USD) as the fifth-place finisher.

Riess was trying to follow in Phil Hellmuth’s footsteps and become the second player to ever win both the WSOP main event and the WSOP Europe main event. Riess’ quest for glory was cut short in fourth place when he ran 7Spade Suit7Club Suit into the ASpade SuitAClub Suit of Krasimir Yankov preflop. The board came down 9Heart Suit8Spade Suit4Club Suit9Diamond Suit2Diamond Suit and Riess was knocked out in fourth place. He was awarded €337,778 ($388,445 USD) for his deep run.

Yankov may have knocked out Riess, but even after that hand, he was still the shortest stack among the remaining three players. That said, he had over 40 big blinds when his final hand arose. Yankov raised to 500,000 from the button with the 5Diamond Suit5Club Suit. Sinclair called from the small blind holding the 7Heart Suit7Club Suit. Bujtas had also picked up a pocket pair with the 2Diamond Suit2Club Suit and made the call.

The flop brought the QDiamond Suit7Diamond Suit5Spade Suit to give Sinclair set-over-set against Yankov. It checked to Yankov, who bet 650,000. Sinclair check-raised to 2,000,000. Bujtas folded and Yankov made the call. The KSpade Suit hit the turn and Sinclair checked. Yankov bet 2,300,000 and Sinclair moved all in. Yankov quickly called for his last 8 million or so with his set of fives, only to see he was drawing to one out going into the river. The 6Spade Suit was no help and Yankov was eliminated in third place, earning €480,028 ($552,032 USD).

With that cooler Sinclair took a slight lead of just a handful of big blinds into heads-up play against Bujtas. The two battled back and forth, but Sinclair made two pair on the river against a missed straight draw for Bujtas and picked off his opponent’s bluff to take the decisive lead and never relinquished it from there on.

By the time the final hand arose Bujtas was down to just over 10 big blinds. He moved all-in from the button with the JDiamond Suit7Spade Suit and Sinclair made the call with the QHeart SuitClub Suit. The board ran out KDiamond SuitQClub Suit3Heart Suit6Heart Suit7Club Suit and Sinclair paired his queen to take down the pot and the title. Bujtas earned €693,573 ($797,609 USD) as the second-place finisher.