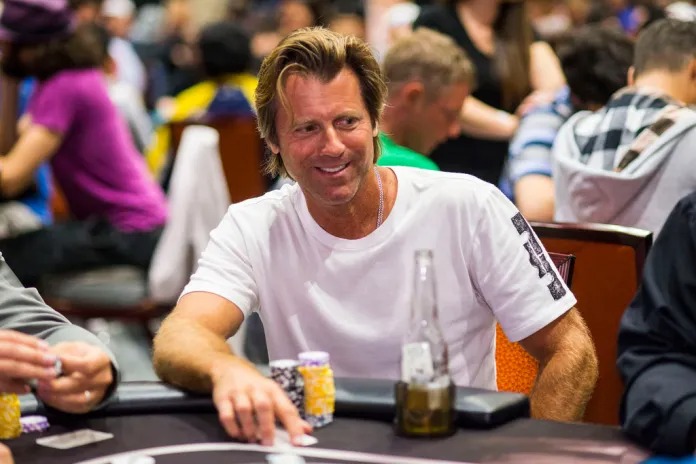 17 seasons of the World Poker Tour! I’ll tell you some interesting things that have happened.

I only got the part as the commentator because the producers knew of me. But, I didn’t have an agent at the time and my sister-in-law, Shana Hiatt, was up for a part and she mentioned that she used to work a big live poker game. They said ‘You got to be kidding! We wanted to get in touch with Vince Van Patten,’ then the connection happened. I took the job and that was 17 seasons ago!

Mike Sexton and I became close friends right from the start. We had a lot in common. Degenerate gamblers. Poker players. Action guys. We’d bet on anything. We bonded immediately and still remain great friends.

I quickly invited Mike to play my big Beverly Hills game which he loved and we played for years after. It got bigger and bigger and more and more exciting!

Even though we were best friends it still didn’t stop us from making huge bets against each other. We’d bet tennis, ping pong, and all kinds of sports, especially golf. We would bet between each other and cut the bookies vig out. Which win or lose, we felt good about.

For the first five years of World Poker Tour, we would have to do studio work for nine hours a day and we would come straight from the Beverly Hills game at 8:00 am with hardly any sleep. You might be able to tell in the voiceovers as we are very groggy, the producers literally had to wake me and Mike up on certain occasions during the show.

Mike Sexton used to drink five Cokes a day during studio work to keep him awake. I’d have six cups of coffee on average.

Mike Sexton is the greatest gambling negotiator, especially golf, I’ve ever been around! He disarms them with hillbilly charm and then traps them like a snake! On a golf course, it’s good to be on his betting side.

We literally traveled the entire world across five different continents! China was pretty amazing! Worst mistake I ever made was getting a haircut in China. She gave me a “bowl” cut and I resembled one of the dudes out of  Dumb and Dumber. But playing a round of golf for serious money against Matt Savage, another great gambling negotiator, also a huge mistake! I loved the event in Paris, France at the Aviation Club! In the earlier years, I used to play all the cash games and there were some wild games to be played! I left one evening at 1:00 am and luckily for me five minutes later the place was held up and everyone gave up their money and profits to the thieves that evening! Phil Ivey and a few other name players lost their bankrolls that night. Luckily, no one was hurt.

So many great locations but my favorite one might be St. Maarten because I love the Caribbean waters, the casino, and the food!

The greatest moment on the World Poker Tour was watching Mike Sexton win in Montreal. Coming in a close second was seeing Tony Dunst make it to final tables and win! These are both great guys and I’m proud to have them as my partners!

Tony Dunst did a great job as the WPT Raw Deal host. Phil Hellmuth is really doing well with it now!

Finally, Lynn Gilmartin is the nuts. She’s got it all, and is a pleasure to work with!

Until next time, play loose and bluff on the river!