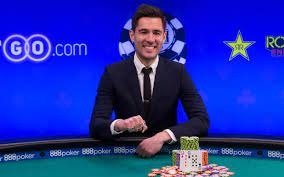 The 2018 WSOP $888 buy-in ‘crazy eights’ No Limit Hold’em event drew in a massive field of 8,598 total entries. The outstanding turnout constructed a prize pool of $6,871,521. The largest portion of that money was awarded to ultimate champ Galen Hall, who took home his first career World Series Of Poker gold bracelet and the $888,888 first prize. This was the second largest score of Hall’s career behind the $2.3 million he earned as the winner of the 2011 PokerStars Caribbean Adventure main event. With the win, the American has more than $5.1 million in lifetime winnings.

New York CIty’s Galen Hall, 33, a Stanford University graduate came into the final table as one of the shorter stacks. After the removal of Philip Tom in eighth place ($90,888) he was the second shortest stack, with just 18 big blinds. Galen Hall won a flip with AClub SuitQHeart Suit against Jeremiah Miesen’s pocket tens, leaving him short. Miesen hit the rail in sixth place not too long after, earning $153,888. Hall continued his rise up the leaderboard by knocking out Alex Kuzmin in fifth place ($201,888) and bracelet winner Andrey Zaichenko in fourth place ($266,888).

With that Hall took the lead into three-handed play. Play was halted for the night late on Tuesday, July 3, with the remaining players agreeing to take the following day off so that they might play day 1C of the main event. In the end Hall won a couple of key preflop races in order to seal the deal. He first called Niels Herregodts’ four-bet all-in with the AClub SuitKClub Suit and won against Herregodts’ 4Club Suit4Diamond Suit by spiking a king on the flop. The Bulgarian earned $355,888 as the third-place finisher.

Not long after that Hall called Eduards Kudrjavcevs shoved from the button with the 9Spade Suit9Diamond Suit and found himself up against JHeart Suit10Club Suit. The board came down 8Heart Suit6Diamond Suit5Club Suit7Spade SuitKSpade Suit and Hall’s pair held up to earn him the pot and the title. Kudrjavcevs took home $476,888 as the runner-up.