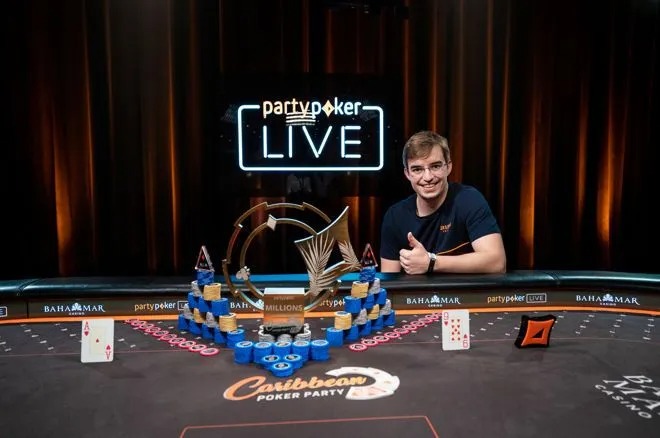 Portuguese player Filipe Oliveira has won the 2018 Caribbean Poker Party $10 million guaranteed $5,300 buy-in no-limit hold’em main event. The tournament attracted a total of 1,815 entrants, which meant that the event ended up with an overlay of more than $900,000. Oliveira earned a massive $1.5 million first-place prize as the champion of this event, dwarfing his previous career live tournament earnings of just over $100,000.

While Oliveira came into the day with an above average stack, he discovered himself rolling down the leaderboard after losing several big pots at the final table. He diminished down to just 3.5 big blinds during six-handed action but managed to find a triple up, getting all-in with KHeart Suit6Club Suit and flopping a six to take the lead in the hand. He held from there to chip up from 35,000,000 to roughly 120,000,000. He found another double up not long after that to get himself right back into contention.

Oliveira won a coin flip with pocket nines against the KSpade SuitJDiamond Suit of Pascal Hartmann. The board ran out ASpade Suit4Club Suit2Spade Suit8Diamond Suit5Club Suit to send the German home in fourth place with $800,000. He continued to chip up during shorthanded play, taking the chip lead into heads-up even after Craig Mason knocked out Marc MacDonnell in third place ($1,000,000). Oliveira increased his advantage even further as heads-up play continued.

In the final hand Mason raised from the button and then called Oliveira’s three-bet to 120,000,000. The flop brought the QDiamond Suit9Club Suit2Spade Suit and Oliveira bet 60,000,000. Mason moved all-in for 299,000,000 and Oliveira called with AHeart Suit9Heart Suit for middle pair and an ace kicker. Mason was in rough shape with the KHeart Suit9Spade Suit. The turn was the JDiamond Suit and the river the 4Heart Suit, securing the pot and the title for Oliveira and sending Mason to the rail in second place ($1,200,000).