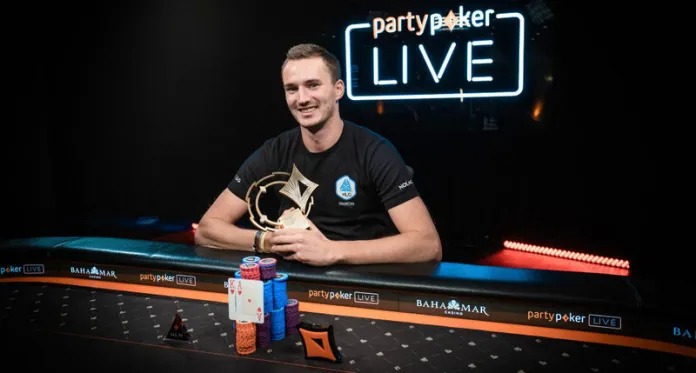 The 2018 Caribbean Poker Party Super High Roller Championships drew a field of 34 entries, each posting the massive $250,000 buy-in to build a final prize pool of $7,517,500. In the end, German poker pro”Steffen Sontheimer”:https://www.cardplayer.com/poker-players/299014-steffen-sontheimer defeated a stacked final table to emerge victorious with the title and the first-place prize of $3,685,000. This was the largest payday of the 28-year-old’s tournament career, and it brought his lifetime live earnings over $12.6 million.

After two full days of action, the field of 34 entries had been narrowed to just six players. Only the top four finishers made the money, which meant that two of the final six were ultimately sent home empty-handed. The first player to be knocked out on day 3 was Isaac Haxton, who made top pair and a flush draw with JDiamond Suit10Diamond Suit on a JClub Suit8Diamond Suit6Diamond Suit flop. He check-called the flop and the 9Club Suit turn, only to check-call the all-in shove of Sontheimer on the ASpade Suit river. Sontheimer’s ADiamond SuitJSpade Suit made two pair on the river, enough to send Haxton to the rail two spots shy of the money.

Two-time World Series of Poker bracelet winner Nick Petrangelo was knocked out on the $700,000 bubble, running ASpade SuitKSpade Suit into the JSpade SuitJDiamond Suit of David Peters. The board improved neither player and Petrangelo eliminated in fifth place.

Four-handed play began with Sontheimer holding a massive chip lead, having 16.9 million of the roughly 34.2 million chips in play. The final four battled it out for a while, with the shorter stacks all doing their best to outlast each other and earn an additional $720,00 for laddering up to third place.

High roller regular Mikita Badziakouski was the first to fall. His stack had dwindled to around 12 big blinds when it folded to Sean Winter in the small blind. Winter moved all-in with the AHeart SuitQDiamond Suit and Badziakouski called with his KDiamond SuitJClub Suit. The board came down AClub Suit9Heart Suit2Heart SuitKHeart Suit3Diamond Suit and Badziakouski busted in fourth place ($700,000). This was the Belarusian’s 11th final table of 2018, and he earned 240 Card Player Player of the Year points for his latest deep run. With five titles, 4,926 points and $14,594,839 in year-to-date earnings, Badziakouski now sits in 10th place in the 2018 POY race standings.

Just moments later Sontheimer opened to 400,000 from the button holding the AHeart SuitKClub Suit. David Peters moved all in for 1,995,000 with the KHeart SuitQClub Suit out of the small blind. Winter folded and Sontheimer made the call. Sontheimer hit a king on the turn to send Peters to the rail in third place. The 2016 Card Player Player of the Year award winner earned $1,420,000 and 320 POY points for his 23rd final table of the year. With $10,290,733 in cashes so far and 7,197 points, the American poker pro has secured his hold on the fourth-place spot on the POY leaderboard.

With that Sontheimer took roughly 22 million chips into heads-up play against Sean Winter, who held just over 12 million. The two were pretty deep stacked, but it didn’t end up taking that long for all the chips to get into the middle.

In the final hand of the tournament Winter limped in from the button for 160,000 holding the AClub SuitQHeart Suit and Sontheimer raised to 700,000 from the big blind with the AHeart SuitKHeart Suit. Winter then three-bet to 2,000,000. Sontheimer moved all in, having Winter’s stack of 10,295,000 covered. Winter made the call and saw that he was in rough shape as the dealer prepared to burn and turn. The board came down 10Spade Suit5Diamond Suit3Heart Suit4Spade Suit9Diamond Suit and Sontheimer’s ace-king high was enough to earn him the pot and the title. Winter took home $2,430,000 as the runner-up, the largest cash of his career. He earned 400 POY points for his 13th final-table finish of 2018, climbing into 37th place in the POY rankings as a result.

Sontheimer took home 480 POY points as the champion. This was his fifth final table showing of the year, but he remains just outside of the top 200 after taking down this event.