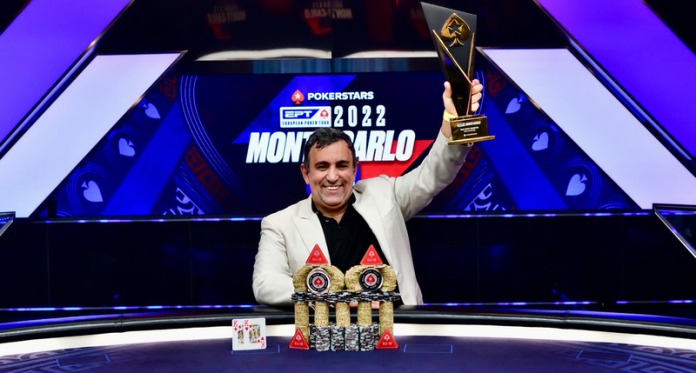 After two starting flights and four more days of tournament action in the €5,300 no-limit hold’em main event 2022 European Poker Tour Monte Carlo, it was 55-year-old Marcelo Simoes Mesqueu who ended up striking a deal heads-up with Morten Hvam for €564,640 and the title. Morten Hvam took second place for €564,640.

This was Marcelo Simoes Mesqueu’s seventh recorded career title. His largest latest victory being a win in a Brazilian Series of Poker event for $109,350. He now has more than $1.4 million in earnings to his name. This was his first POY-qualified final-table finish of the year, but it alone was enough to catapult him into 17th place in the 2022 POY race, which is sponsored by Global Poker.

The final day of this event began with just six players remaining, with 2019 PokerStars No-Limit Hold’em Players Championship (PSPC) champion Ramon Colillas eliminated in seventh place ($131,691 USD) at the end of the previous night’s action. Morten Hvam came into the final day with the lead, while Mesqueu sat in second chip position.

Six-handed play lasted for several hours, with the first elimination of the day not taking place until after four levels had been completed. During that time, Mesqueu had overtaken the lead and pulled away from the pack. He added to his total when his 5-3 outran the A-2 of short stack Erkan Soenmez (6th – $175,402 USD) to finally send a player to the rail.

The knockouts came fast and furious after that. Mesqueu open-shoved with K-9 and received a call from Hugo Pingray, who held A-K. Both players flopped a king, but a nine on the turn gave Mesqueu two pair and a big lead. The river changed nothing and Pingray was eliminated in fifth place ($239,883 USD).

Jaime Cervantes’ run in this event concluded when his A-J failed to win a preflop race against the pocket nines of Hvam. He was down to needing an ace or jack on the river by the turn, and when a blank rolled off the deck he settled for $313,645 USD as the fourth-place finisher.

Dragos Trofimov got the last of his short stack in with A-4 facing the J-8 of Mesqueue and the J-6 pf Hvam. The flop gave Hvam jacks and sixes, which remained best through the turn and river. Trofimov secured $417,469 USD for his third-place showing.

Heads-up play began with Mesqueu holding 25,250,000 to Hvam’s 6,950,000. The two discussed a deal, but ultimately played on without having come to an agreement. In the final hand, Hvam min-raised on the button with KClub Suit10Diamond Suit and Mesqueu three-bet with KHeart SuitKDiamond Suit. Hvam called and the flop came down 9Diamond Suit7Diamond Suit6Spade Suit. Mesqueu made a continuation bet of 1 million, only to have Hvam move all-in for 3.4 million. Mesqueu made the call with his overpair. The turn brought the 5Spade Suit and the river the JDiamond Suit, locking up the pot for Mesqueu and his pocket kings. Hvam earned $592,872 USD as the runner-up finisher.

Play your favorite poker games when you’re in New York City. A light screening process is required to join the madness! Text:”SPBlog” to (347) 471 1813 to RSVP & Address with full name, email & occupation.