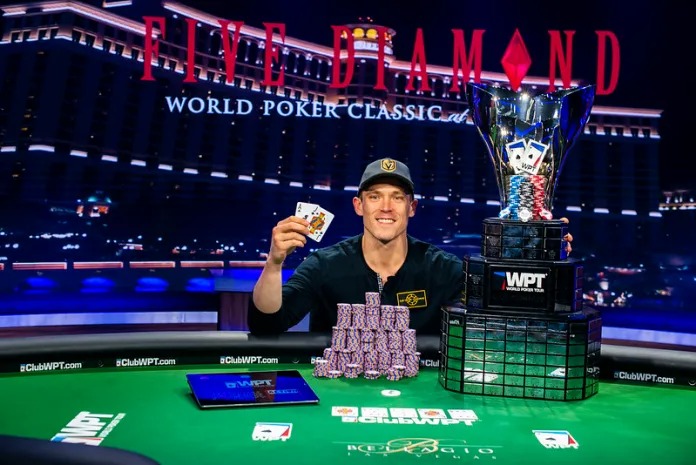 Alex Foxen has won the 2019 World Poker Tour Five Diamond World Poker Classic $10,400 buy-in no-limit hold’em main event at Bellagio. The 28-year-old poker pro from Cold Spring Harbor, NY earned $1,694,995 for defeating a record-setting field of 1,035 total entries in this event, which was up from a previous high of 1,001 entries in 2018. Incredibly, Foxen had finished as the runner-up in this same tournament in 2017. He managed to battle his way back to heads-up play just two years later, and this time around emerged victorious with his first WPT main event title.

“It’s surreal – it’s kind of hard to put into words,” Foxen told WPT reporters after coming out on top. “It feels amazing. The last time I got to this spot I was a little bit disappointed in how I played heads-up. It’s just incredible to get the opportunity again and be fortunate enough to pull out the win.”

“Winning the WPT trophy in this event particularly is definitely the biggest thing to me. It’s the most significant tournament win to me so far. It’s awesome,” Foxen continued. “[The] WPT is probably the most prestigious tour besides the WSOP, and it just feels amazing to win this one because it’s just one of the biggest, toughest ones.”

In addition to the title and the money, Foxen was also awarded 2,400 Card Player Player of the Year points for taking down this event. This was his second title and 19th final-table finish of 2019. The huge score, made with just over a week remaining in the year, was enough to see Foxen climb into second place in the 2019 POY race standings, which are sponsored by Global Poker. With 7,134 total points and $5,687,955 in year-to-date earnings, Foxen currently sits just 210 points behind the current leader Stephen Chidwick.

The final day of this event with Foxen sitting in second chip position behind Danny Park with just six players remaining. Foxen was able to win a big hand against Park early on to supplant him atop the leaderboard. He furthered his advantage by scoring the first knockout of the day, with his 9Spade Suit9Club Suit beating out the KClub SuitQSpade Suit of Jonathan Jaffe on a 10Diamond Suit10Club Suit2Spade Suit8Spade SuitJSpade Suit runout. The WPT champion was sent to the rail in sixth place, earning $355,125 for his deep run in this event.

Despite starting the day with the largest stack, World Series of Poker bracelet winner Danny Park was the next to be eliminated. During five-handed action he lost a preflop race with pocket three’s against Toby Joyce’s ace-king to fall to the bottom of the chip counts. Not long after that he got all-in with 10Spade Suit10Club Suit against the AHeart SuitQDiamond Suit of Joyce. Park remainined ahead through the flop and turn, but the QHeart Suit on the river gave Joyce the superior pair and the pot. Park took home $465,780 as the fifth-place finisher.

Four-handed action continued for around ten orbits. Peter Neff had begun the day as the clear short stack, but had managed to stay afloat long enough to secure two pay jumps. Neff’s run came to an end when he shoved all-in from under-the-gun with KDiamond SuitQClub Suit and got looked up by Seth Davies, who had picked up AClub SuitJSpade Suit on the button. The board came down ADiamond Suit9Club Suit7Diamond Suit6Heart Suit8Diamond Suit and Davies hit a pair of aces to eliminate Neff in fourth place ($617,480).

With just three players remaining, Foxen had already begun to pull away from the pack. Following Neff’s elimination, he sat with over 25 million in chips for more than 120 big blinds, while Seth Davies and Toby each had around 35-40 big blinds.

Davies and Joyce managed to find a few double-ups through Foxen, but he still was the clear leader by the time the next knockout took place. Davies got his last chips in with AClub Suit5Club Suit, only to run into the AHeart SuitQHeart Suit of Foxen. Davies was unable to come from behind and was sent to the rail with $827,285. This was the second-largest score of Davies’ career, and it brought his lifetime earnings to $7,693,891.

With that Foxen took more than a 2.5:1 chip lead into heads-up play against Joyce, who was looking to become the first-ever Irish WPT main event champion. He quickly built that advantage to more than 4:1 by the time the final cards were dealt. On the ninth hand of heads-up play, Foxen limped in from the button with AClub SuitJSpade Suit and Joyce checked his option holding JHeart Suit9Club Suit. The flop came down JClub Suit5Spade Suit3Diamond Suit and Joyce checked. Foxen bet 400,000, only to have Joyce check-raise to 1,100,000. Foxen three-bet to 2,000,000 and Joyce made the call. The KClub Suit on the turn prompted Joyce to check. Foxen moved all-in, having Joyce well covered. Joyce made the call, only to find he was in rough shape. The 4Club Suit on the river secured the pot and the title for Foxen. Joyce earned $1,120,040 as the runner-up finisher.