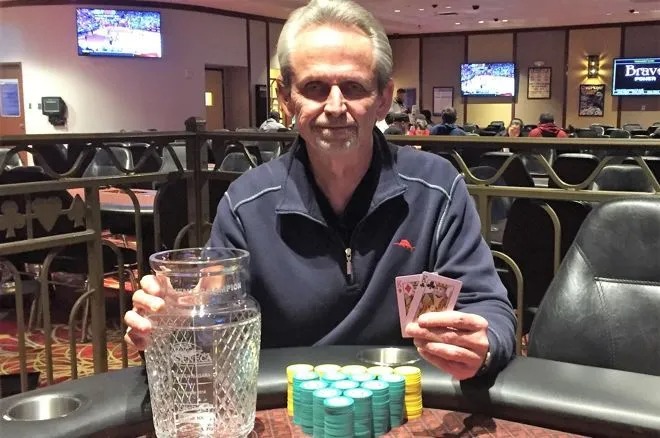 Victor Adams has won the 2018 Card Player Poker Tour Seneca Fall Poker Classic $1,000 no-limit hold’em main event at the Seneca Niagara Casino & Resort. The Canadian outlasted a field of 249 entries to secure the title, the $53,583 top prize and his spot on an upcoming cover of Card Player magazine. This was the first live tournament win for Adams, whose career earnings have grown to $133,282.

In addition to the title and the money, Adams also scored 432 Card Player Player of the Year points as the champion of this event. This was his second POY-qualified final table of the year, having finished seventh in the WSOP International Circuit Canada main event for $15,400 and 114 points in September.

Adams entered the final day as the shortest stack with seven players remaining, sitting with 451,000 when play resumed on day 3. He got off to a strong start, chipping up and then picking up the ADiamond SuitAClub Suit and calling the all-in of Jason James, who had shoved with the ASpade SuitJClub Suit. Adams’ aces held to send James to the rail in seventh place ($7,913).

In 2015 Alex Visbisky finished third in this event. He managed another deep run this year, but ultimately was knocked out in sixth place when his ADiamond Suit4Diamond Suit couldnt beat the pocket tens of Vadim Rozin in a preflop showdown. Rozin ended up making quads to send Visbisky home with $10,110.

Adams scored his second knockout of the day by winning a race with 10Spade Suit10Club Suit against the AHeart SuitJClub Suit of Tim Vance. Neither player improved and Adam’s tens earned him the pot, eliminating Vance in fifth place ($13,407).

Peter Mancini entered the final day as the chip leader, but his run in this event came to an end when he got all-in with 5Heart Suit5Diamond Suit and failed to hold up against the ADiamond SuitJClub Suit of Chris Meyers, who flopped an ace and hit trips on the turn. Mancini was awarded $18,023 as the fourth-place finisher.

Adams entered three-handed play as the shortest stack but managed to pick up pocket aces against the pocket queens of Chris Meyers to double up. Meyers was left with just over six big blinds after the hand but managed to claw back into contention.

The final three ended up playing for roughly six hours before the next elimination took place. Vadim Rozin was dealt the 8Heart Suit8Diamond Suit moved all in from the button for around 1.1 million with blinds at 30,000-60,000 with a 60,000 big-blind ante. Adams called with the ADiamond SuitJClub Suit. The board ran out AClub SuitKSpade SuitJSpade Suit2Club SuitKDiamond Suit and Rozin was sent home in third place ($24,397).

Adams took roughly a 3.5-to-1 chip lead into heads-up play against Chris Meyers. The shorter stack was able to even things out in a big hand by making trip three on the turn against Adams’ pocket aces. The lead changed hands several times from there. By the time the final hand arose Adams was on top. With blinds of 60,000-120,000 with a 120,000 big-blind ante, Meyers moved all-in from the button for 1,655,000 holding the ADiamond SuitJDiamond Suit. Adams quickly called with KDiamond SuitKClub Suit. The board bought the 8Diamond Suit7Heart Suit6Heart Suit7Spade Suit3Heart Suit, securing the pot and the title for Adams. Meyers earned $33,848 as the runner-up finisher.

The world-class gaming facility opened in 2002 as the result of an $80 million remodel of the Niagara Falls Convention and Civic Center into a full-service casino. The property also features fine dining, star-studded entertainment, a health and wellness spa and many other premium guest amenities. For more information, or to book a room, call 716-299-1100 or visit the casino homepage.

To learn more about the CPPT and see other upcoming tour stops, visit the tour’s homepage.