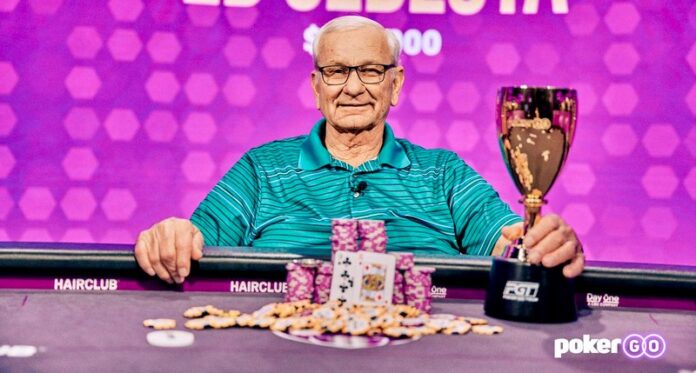 The third $10,500 buy-in no-limit high roller of the 2023 PokerGO Cup festival is officially in the books. A total of 90 entries were made by the time registration close, creating a final prize pool of $900,000 that was paid out among the top 13 finishers. After two days of high-stakes tournament action, Ed Sebesta emerged victorious with the title and the top prize of $216,000.

This was the second-largest tournament score yet for the Texas resident, trailing only the $311,915 he earned as the winner of a $10,000 high roller at the 2022 Seminole Hard Rock Poker Open. He now has more than $1.1 million in career earnings.

In addition to the title and money, Sebesta also earned 540 Card Player Player of the Year points for the win. He also earned 216 PokerGO Tour points, enough to move him into a tie with Sean Winter for the lead in both the PokerGO Cup points race and the PokerGO Tour standings.

While 13 players made the money in this event, only the top six moved on to day 2 action and the live-streamed final table. Among those that cashed but fell short of the final day were two-time World Series of Poker bracelet winner Nick Petrangelo (12th), bracelet winner Andrew Lichtenberger (11th), bracelet winner and poker vlogger Ethan ‘Rampage’ Yau (9th), and 2022 POY race runner-up Farid Jattin (8th).

The final day began with Philip Shing in the lead and Sebesta in second chip position. Three-time bracelet winner Kristen Foxen started as the short stack, and it took just one hand for her to get all-in. On the first deal of the day, she shoved with pocket jacks from the small blind and Cary Katz called with pocket eights in the big blind. The board brought four diamonds, and with the only diamond in his hand, Katz won the pot and eliminated Foxen in sixth place ($54,000).

Both Foxen and four-time bracelet winner Adrian Mateos were at their second final table of the series. Mateos’ run soon ended when his pocket tens failed to hold up against the A-8 of Shing. An ace-high flop gave Shing the lead and he held from there to send Mateos packing in fifth place ($72,000). The Spanish tournament superstar now has nearly $30.7 million in career earnings.

Katz was the next to fall. He got all-in with a king-high flush draw facing top pair of queens for Sebesta. The turn and river brought no help for Katz and he was knocked out in fourth place ($90,000). He now has more than $35.7 million in lifetime cashes.

While he started the day in the lead, Shing had doubled up Sebesta during four-handed action to fall out of the top spot. He was essentially tied for second when the next big hand arose. With blinds of 75,000-125,000, Shing shoved for 2,500,000 with pocket fives from the button. Sebesta called from the small blind with pocket jacks and three-time bracelet winner Nick Schulman got out of the way in the big blind. The larger pocket pair remained best by the river and Shing was eliminated in third place ($108,000). This was his fifth career six-figure score, increasing his lifetime earnings to more than $1.1 million.

Heads-up play began with 9,000,000 for Sebesta and 2,250,000 for Schulman. The disparity had shrunk a bit after about 20 minutes of play, but Sebesta was still solidly ahead when the final hand of the tournament was dealt. Sebesta open-shoved from the button with KDiamond Suit9Club Suit, an effective bet of just over 27 big blinds. Shulman thought it over before calling off his 3,400,000 stack with ASpade Suit7Club Suit. The board ran out QHeart Suit6Heart Suit4Club SuitKSpade Suit9Heart Suit and Sebesta made kings up to secure the pot and the title.

Here is a look at the payouts and rankings points awarded to the final six: