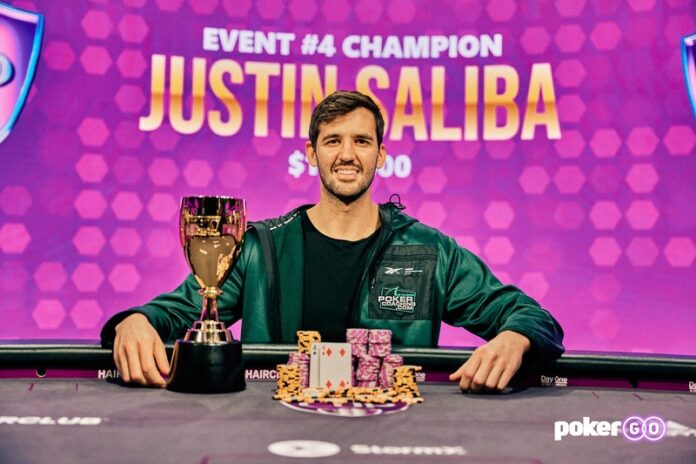 The final table for event no. 4 at the PokerGo Cup took place on Tuesday, Jan. 17 in Las Vegas as the final six players battled it out on the second day of play to decide a champion from the total field of 78 entries. The top 12 made the money in this $10,000 no-limit hold’em tournament to take home a portion of the prize pool worth $780,000, but the big money was up for grabs at the final table inside the ARIA PokerGO Studio.

Justin Saliba scored his second six-figure payday of 2023 and grabbed the top prize worth $195,000. This win was also the fourth largest cash in his poker career.

The former University of Dayton soccer standout played the underdog role for most of the day after entering the table fifth in chips, and held the short stack for a while before the first elimination.

Saliba also had half the chips of his final opponent Anthony Hu at the start of heads-up play, but he was able to rally back for the victory.

The high-stakes newcomer also took home 420 Card Player Player of the Year points, and he now sits in the top ten during the early stages of the POY race. He was awarded 195 PGT points as well to join the top ten on the PokerGO Tour standings.

Notables that cashed on the way to the final table in this event included Nick Petrangelo (10th), Dan Shak (ninth), Brian Kim (eighth), and Jeremy Ausmus (seventh) in yet another star-studded field at this tournament series.

Poker legend Erik Seidel was the first player to fall at the final table in sixth place when his A-6 lost to the K-J of Saliba when a jack hit the flop. Seidel added $46,800 to his bank account and now has just over $43.3 million in career earnings.

The red-hot Andrew Moreno was the next short stack to be at risk, but his J-7 ran into the pocket aces of Adrian Mateos, and Moreno was eliminated in fifth place. This was Moreno’s second fifth-place showing of the series, having also done so in event no. 2. He has now cashed for a combined $128,800 this week.

Hu continued to build on his chip lead when he eliminated Calvin Lee. A jack on the flop on the flop was the culprit once again, giving Hu’s J-8 enough fire power to top Lee’s K-9.

Saliba then scored his second knockout at the final table when his K-J had the K-10 of Mateos dominated. Mateos was out in third place for $93,600, bringing his lifetime total to $30.7 million. The Spaniard has made three final tables so far at the PokerGO Cup, having finished fifth in both event no. 1 and no. 3, cashing for a total of $237,600.

Saliba fought his way back from the early chip disadvantage against Hu, reversing their roles by the time the final hand of the tournament was dealt. Hu got all in preflop with ASpade Suit7Heart Suit, and he looked to be in a good position to score a double against the AClub Suit4Diamond Suit of Saliba. The board had other plans though, as it ran out 9Spade Suit5Diamond Suit2Club SuitQClub Suit3Diamond Suit to give Saliba a straight.

The PokerGO Cup continues Tuesday with the final table of event no. 5, $15,700 no-limit hold’em.