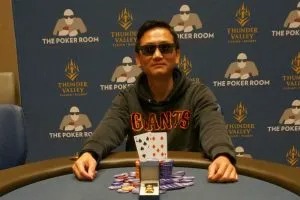 He also collected around a dozen of bounties, each worth $100. He managed to get hold of those all the way throughout the tournament. And he scooped the final one for busting his heads-up opponent, Joe Grew from Colorado.

Thunder Valley Casino Resort in Lincoln, California will play host to the WSOP Circuit series over the week. Two events on the festival’s schedule were completed over the past few days, with Zhang’s tournament being marked as Event #2.

The $400 buy-in tournament drew as many as 239 entries who created a prize pool of $54,970. As mentioned above, the event also featured bounties, each worth $100. The winner managed to collect 12 such bounties to boost his first-place award by another $1,200. Aside from Zhang, who went out with the lion’s portion of the prize pool, the top 24 finishers received a share of the money, min-cashes starting from $507.

The tournament kicked off on Sunday and was supposed to be a single-day one. Action extended well into the night with Zhang and Grew battling it out for the title. However, an emergency alarm forced evacuation of the casino, so the two competitors decided that they would continue play on Monday.

Highlights from the Tournament It was early into Monday when the unofficial ten-handed final table of the tournament was reached. Zhang was the chip leader at the time with 939,000 in chips. The player was well ahead of his nearest rival who happened to be William Chao with 633,000 in chips.

Zhang very much maintained his momentum over the course of the final table. It was Joe Grew whom he faced heads-up. The two players fought in a bid to win the title and the gold ring well into the early hours of Monday. As mentioned above, their match was forced to stop due to an emergency situation at the host casino. The two players decided that they would resume action on Monday, giving themselves a couple of hours to rest.

They returned to finish off what they had started on Monday at 3 pm local time. Zhang was holding the majority of chips at the start of the unscheduled second day and kept his lead until the end of play, which did not last long, actually. The two players battled it out for just eight hands until Zhang dealt the final blow to his last surviving opponent to scoop the title and the accompanying gold piece. Grew received $8,494 for his efforts.