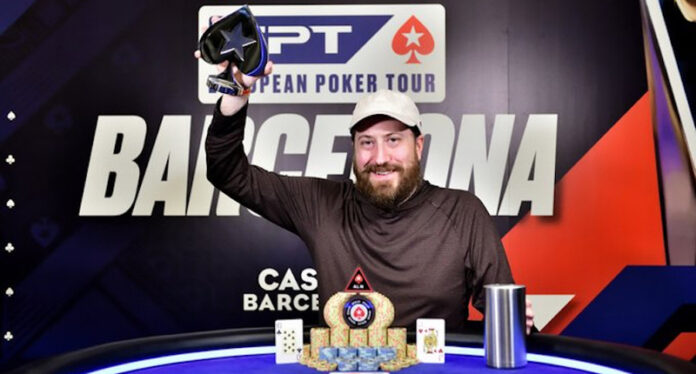 Steve O’Dwyer closed out the 2022 European Poker Tour Barcelona festival with a bang, taking down the final high roller event of the series to secure his 31st recorded live tournament title and his 67th career score of six figures or more.

The American-born poker pro, now based out of Ireland, also earned 420 Card Player Player of the Year points after emerging victorious. This was O’Dwyer’s third title of the year, having also won the Irish Open main event and a €3,300 buy-in side event at the partypoker LIVE MILLIONS Europe festival, which joined his most recent win in taking place at the Casino Barcelona. With those titles and four more final-table finishes as well, O’Dwyer has accumulated enough points to climb to 23rd place in the 2022 POY race sponsored by Global Poker.

The top seven finishers made the money in this event, with bracelet winner and recent EPT Barcelona €100,000 buy-in champion Mikita Badziakouski being knocked out on the money bubble when his pocket tens were unable to hold up against the A-4 suited of Spanish poker pro Juan Pardo.

Nine-time bracelet winner Erik Seidel was the first to fall inside the money, with his A-J suited running into the A-K of Pablo Brito Silva. Neither player improved on a nine-high runout and Seidel was eliminated in seventh place ($67,517). This was the 62-year-old Hall of Fame member’s tenth final-table finish of the year. With one title won and more than $3 million in year-to-date earnings, he is now sitting in 12th place on the POY leaderboard.

Finnish bracelet winner Eelis Parssinen’s run in this event came to an end when his A-4 suited faced off against the A-10 suited of Brazil’s Bruno Volkmann. Parssinen picked up a pair and a flush draw, but Volkmann had hit a higher pair on the flop. Volkmann picked up a backdoor flush draw on the turn, as well. The river helped neither player and Parssinen was knocked out in sixth place ($86,808).

Despite having eliminated Seidel, Silva found himself as the short stack with five remaining. He had doubled up O’Dwyer a bit earlier, then lost a huge pot without showdown to recent Seminole Hard Rock Poker Open main event champion Sergio Aido. Silva eventually got the last of his short stack in with A-3. He was all-in and at risk, facing the pocket kings of O’Dwyer. The overpair held up and Silva was sent home with $109,303 for his latest deep run. The Brazilian now has more than $1.7 million in recorded earnings to his name.

The chip lead changed hands several times during four-handed play. Eventually, O’Dwyer won a crucial preflop race to narrow the field and take the lead for what turned out to be the last time. His ADiamond SuitJDiamond Suit beat out the 4Spade Suit4Heart Suit of Aido, improving to the nut flush on the river. Aido secured $141,460 for his fourth-place showing. This was his seventh final-table finish of the year, and it saw him earn enough POY points to move into 21st place in the overall standings.

Not long after that, O’Dwyer open-shoved from the small bling with KClub Suit6Club Suit and Volkmann called all-in for around 12 big blinds with ADiamond SuitJDiamond Suit. O’Dwyer flopped kings and sixes and held from there to eliminate Volkmann in third place ($186,471).

Heads-up play began with O’Dwyer holding 4,075,000 to Pardo’s 1,125,000. Pardo was able to battle his way back into it, but he lost a gigantic pot when his river bluff was picked off by O’Dwyer. Pardo was left on fumes after that. He was soon all-in with J-3 offsuit trailing the J-10 of O’Dwyer. A ten-high runout locked up the pot and the title for O’Dwyer. Pardo cashed for $276,482 as the runner-up, increasing his career earnings to $5.2 million.