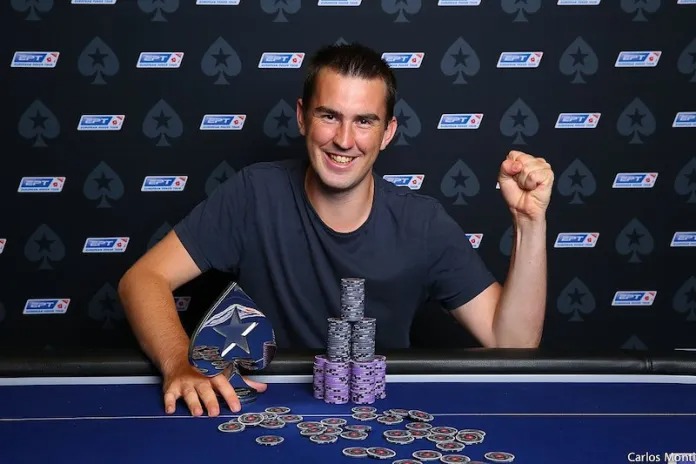 Currently sitting at no.2 on the 2018 WCOOP leaderboard, Norway’s Tobias ‘Senkel92’ Leknes has won two WCOOP titles this year, bringing his total to three overall.

We caught up with Leknes just after his most recent win to discuss all things WCOOP, and why winning the leaderboard is now his priority.

PokerStars Blog: Congratulations on winning your third WCOOP, and second this year! How does it feel?

Tobias ‘Senkel92’ Leknes: “It of course feels great! I got my first in 2-7 Triple Draw last year, but getting the second and third is sweet! I’ve planned to play a lot of events during the series, so getting a win early on is always one of the goals. I didn’t expect one to come in a big field NLHE tourney though!”

PSBLOG: You’ve now got some major momentum behind you.

Tobias: “My confidence is naturally very high right now! But all in all winning two tournaments right from the get go is mostly just me running very pure in the key spots. Also it helps to play small field tournaments such as 5-card draw.”

PSBLOG: Do you enjoy NL 5-Card draw as much as other formats?

Tobias: “I learnt the game last year before SCOOP, and I quickly found it surprisingly funny and also more game theoretical than what I initially believed. It’s cool how there is still room for play when you’re very shortstacked, and how finding flaws in your opponents’ game plan could be exploited, although the draw format gives you less information than other games.”

PSBLOG: Are you a professional player, or do you have a another career?

Tobias: “I do play poker for a living, and I’m currently the Norwegian Champion in both 8-game and Limit Hold’em.”

PSBLOG: What is your life like away from the tables?

Tobias: “I live in Oslo, and I’m really enjoying life there. I like to play chess, volleyball, board games of all kinds. I’m a typically competitive guy.”

PSBLOG: You also took down the Win the Button event. Do you have much experience in this format?

Tobias: “I’ve not played many of these events at all, but I typically find that I am decent at adjusting to different formats. But for the most part I was just lucky in the key situations and ran good!”

PSBLOG: Do you have any strategy advice for people playing their first Win The Button events?

Tobias: “It’s kind of hard to give too much general advice. Typically you’re going to see the two players to your left three-bet you a bit wider, so you might get to four-bet a bit lighter both for value and as bluffs. You will need to defend the big blind very wide against button opens.”

PSBLOG: Were there any key hands that you remember on your way to the Win The Button victory?

Tobias: “I was very lucky at the bubble against one of the bigger stacks to win AQ>AK for a massive pot. I also had some coolers go my way with 7♥5♥ beating ace-three on an A♥K♥3♥ flop in a three-bet pot. I also hit another heart flush with three left holding K♥5♥ against Q♦T♦ on a queen-high two-heart flop blind versus blind.”

PSBLOG: Is this the biggest win of your poker career? If not, what was?

Tobias: “This is in fact my biggest win online. I had some close scores both live and online. I finished second in a $2,100 Limit Hold’em event during SCOOP which was my biggest score online prior to this.”

PSBLOG: What does this win mean for you going forward?

Tobias: “Before WCOOP started I was aiming for fighting for the top prize on the leaderboards. I couldn’t find much information about it (see here for the latest standings) but I assumed there was going to be something. It is of course a long shot to win, but my chances are at least getting slightly better.”

PSBLOG: At this rate, how many titles do you think you can win this year? You’re in a great spot for the leaderboards now!

Tobias: “Well, I’m probably an underdog to win anymore titles, but I will give it a shot! Hopefully I can get in some more final tables and be in position to repeat! Fighting for a top spot on the leaderboard will be a priority.”

Congratulations on your second and third WCOOP titles Tobias.