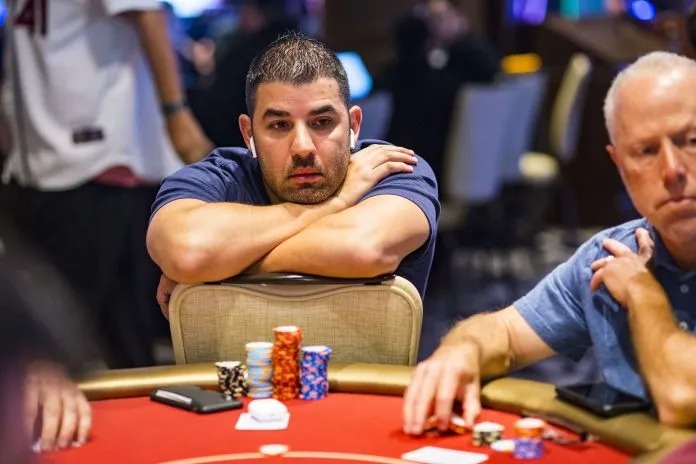 Two summers ago, Frank Crivello got oh so close to winning what would have been his first career World Series of Poker bracelet in an online event, finishing in fifth place in the $3,200 Online High Roller event. Presented with an opportunity to secure the jewelry on Saturday in a 2020 WSOP Online event, Crivello didn’t disappoint.

It took roughly thirty minutes into the final table for the first player to fall. Crivello put in a min raise holding AsKdJdJc and Pulkit Goyal three-bet pot to 2.25 million with KhKc6d4c. This prompted Crivello put in the four-bet and Goyal made the call, putting his tournament life at risk. The [th][5d][3d] flop gave Crivello a flush draw but it was the [jh] turn that gave him the lead in the hand. The [9d] river improved Crivello’s hand to a flush and he sent Goyal to the rail in ninth place for $8,854.

Ajay Chabra found himself following Goyal out the door of his second 2020 WSOP final table as he found himself all-in and at risk holding KcJcTdTh against Julijan Rados’ AdAh7c2d. The Qd6c7h flop was of little help to Chabra and the news didn’t improve on the 5h turn or the Kd river. Chabra was eliminated in eighth place for $12,080.

Canada’s Markus Cara nearly put himself all-in when he raised pot with Ad6d5s5d. He was called by Crivello on the button holding QdQs8h6s. The flop fell 8d3d3s and Cara put his few remaining chips in the middle and Crivello quickly made the call. All-in and behind Cara watched as the 2s turn and 9s river ended his tournament in seventh place, good for $16,480.

The bustouts continued to come as Jin Li raised pot with the KsQdQc7c only to be three-bet by Rados who had Li covered and held AhAdKh4d. Li made the call, putting himself at risk and the table saw a board of 8s7d3dJdTs giving Rados the nut flush and taking out Li in sixth place for $22,483.

Tszfai Tong was the next to be shown the door when he shipped his short stack in holding KdKc8s2h and was called by Crivello who had JdJh6c4c. The flop came ptc]3c2d once again giving Crivello a flush draw which he spiked on the turn as the Qc hit. The 3s river changed nothing and Tong logged off in fifth place earning $30,672.

A major clash at four-handed play between the UK’s Craig Timmis and Yonathan Journo sent Journo out the door next. Journo and Timmis got both their stacks in the middle pre-flop with Journo at-risk and holding KhKd6d4s while Timmis held QcQh7d3s. The QdTs4d flop gave Timmis a set which held through the 9h turn and 2h river. Journo exited in fourth place and picked up $41,485.

No one seemed ready to go broke when the play got down to three-handed as the double-ups continued and the chips spread around the table.

Eventually, Timmis and Rados faced off when Timmis raised pot on the button with AhKd5c4s and Rados made the call holding AhKd5c4s. The pair saw a flop of Qh4d3s and both stacks got in the middle with Rados at risk. The Tc turn gave Timmis a higher pair which held through the 8d river. Rados ended in third place earning $57,088.

Although Crivello lost the chip lead for a moment during heads-up play, the momentum quickly swung back in his favor and he and Timmis got it all-in preflop with the title on the line. Timmis held 6h6c2c2s to Crivello’s pkd]Kh6s3d. The 7sKc2h flop gave both players a set. When the 9d hit the turn, Timmis was looking for the final deuce in the deck. The river fell the 5c eliminating Timmis as the runner-up in his second final table of the series and adding $77,883 to his bankroll.

Frank Crivello walked away with the $106,252.72 first-place prize and his first career gold bracelet.