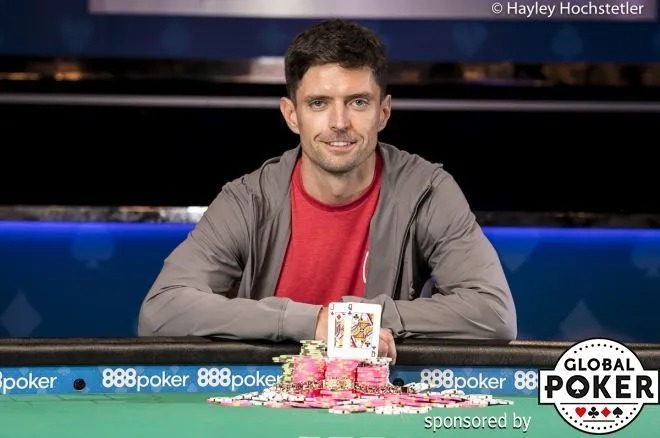 Keith Tilston has won the 2019 World Series of Poker $100,000 buy-in no-limit hold’em super high roller event, defeating a field of 99 entries to secure his first WSOP gold bracelet and the top prize of $2,792,406. This was the 36-year-old’s first seven-figure score, and it brought his lifetime live tournament earnings to more than $6.4 million.

“I do play a lot of high roller events and I feel good to know I can at least hang with these guys,” said Tilston, who has 11 career cashes in events with buy-ins of $25,000 or higher. “Obviously there’s a lot of luck in each individual tournament and you gotta run well. I certainly don’t claim to be as good as a lot of these guys, but it feels good I can at least hang with them.”

In addition to the hardware and the money, Tilston also earned 1,080 Card Player Player of the Year points for the win. This was his first title and fourth final-table finish of the year. With 2,026 points and $3,746,280 in year-to-date earnings, Tilston has climbed into 52nd place in the 2019 POY race sponsored by Global Poker.

Tilston overcame an absolutely stacked final table en route to winning this event. Every single one of his five opponents that joined him on the third and final day of this tournament had previously won a bracelet, with 15 total bracelets between them. Collectively, his five opponents had accumulated just over $90 million in live tournament earnings before entering this event.

Tilston came into the final day with the chip lead. The first of his accomplished opponents to hit the rail was four-time bracelet winner Dominik Nitsche. He shoved just under seven big blinds with KHeart Suit6Heart Suit from the small blind and received a call from the QHeart Suit6Spade Suit of Igor Kurganov. Both players flopped a pair of sixes, but Kurganov rivered two pair to send Nitsche home in sixth place ($457,772).

Kurganov claimed his second knockout by coming out on the other side of a preflop domination situation. 2019 WSOP online high roller event winner Brandon Adams shoved just under 12 big blinds from the button with KHeart Suit9Club Suit. Kurganov held the ASpade Suit9Heart Suit and made the call out of the small blind. Kurganov rivered a five-high straight to knock Adams out in fifth place ($611,258).

Despite scoring the first two eliminations of the day, it was Kurganov who fell in fourth place. The 2017 WSOP tag-team event winner got all-in with AClub Suit9Club Suit in the small blind, shoving over a button raise from Daniel Negreanu. Tilston woke up with pocket kings in the big blind and made the call. Negreanu got out of the way and the board ran out QSpade Suit8Heart Suit2Heart Suit3Club Suit4Spade Suit. Kurganov took home $840,183 for his deep run.

With that Tilston took the lead from three-time bracelet winner Nick Schulman, who had chipped up during the first few hours of action. Negreanu was the shortest stack to start three-handed action, but he managed to double up twice through Schulman to climb into second place. Schulman was left with crumbs and was all-in in the big blind holding 8-5 offsuit in the next hand. Negreanu and Tilston called and checked it down on a KClub Suit10Spade Suit10Club Suit9Spade Suit6Diamond Suit runout. Negreanu showed KDiamond Suit7Heart Suit to scoop the pot and eliminate Schulman in third place ($1,187,802).

Negreanu took a slight lead into heads-up play with Tilston after absorbing essentially all of Schulman’s stack. The six-time bracelet winner was at his fourth final table of the 2019 WSOP, having finished sixth in the $10,000 super turbo bounty no-limit hold’em event, second in the $10,000 seven-card stud championship and fifth in the $10,000 razz championship.

Negreanu was able to expand his lead a bit before Tilston hit trip kings to double into the lead through Negreanu’s top pair. Negreanu briefly regained the lead, but Tilston won a decisive pot with a rivered flush to take nearly a 4-to-1 lead by the time the final hand arose.