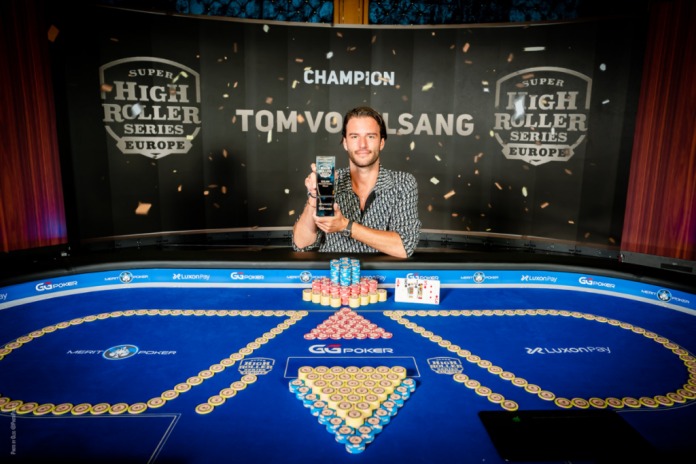 The tournament attracted a field of 40 entries, but there could be only one champion. The Dutch player has now cashed for more than $1.75 million this week, having just finished second in the Triton Poker Cyprus $100,000 no-limit hold’em event for nearly $1.4 million a few days earlier. He now has more than $2.3 million in lifetime live earnings to his name.

Vogelsang now has two big results from this trip to North Cyprus. He finished second in Event #2 of Triton Poker Cyprus for $1,390,000. The two scores now have Vogelsang 18th on the 2022 PokerGO Tour (PGT) leaderboard with 616 points.

The final day of this event began with just six players remaining, all of whom were in the money after Chris Brewer was knocked out on the bubble at the conclusion of day 1. World Series of Poker bracelet winner Eelis Parssinen was the first to fall on day 2, with his double suited A-A-K-9 falling to the single-suited A-A-5-4 of Ali Imsirovic, who rivered a six-high straight to take down the pot. Parssinen earned $50,000 as the sixth-place finisher.

Imsirovic was ultimately the next player out despite winning that clash of pocket aces. He got the last of his stack in on a JSpade Suit6Heart Suit4Spade Suit flop after three-betting prefelop with AClub SuitKHeart Suit7Club Suit5Spade Suit. Vogelsang quickly called with ADiamond SuitJDiamond SuitJClub Suit3Club Suit for top set. Imsirovic picked up a second straight draw after the 10Heart Suit turn, but the board paired on the river to give Vogelsang a full house. Imsirovic (5th – $80,000), who is the reigning Card Player and PGT Player of the Year, had already overtaken the PGT top spot earlier this week thanks to a final-table finish in a Triton CPoker Cyprus event. With four titles, 14 final-table finishes and more than $2.3 million in year-to-date POY earnings, Imsirovic now once again sits atop the leaderboard in both points races as he looks to go back-to-back.

Raphael Schreiner’s run in this event came to an end when his pocket kings with 7-5 suited on the side lost an all-in against the double-suited A-Q-9-4 of Laszlo Bujtas, who made trip aces to secure the pot. Schreiner earned $110,000 as the fourth-place finisher.

Rok Gostisa got the last of his short stack in with QHeart SuitQClub Suit8Spade Suit3Heart Suit up against the ASpade SuitAHeart Suit5Club Suit4Club Suit of Bujtas. The pocket aces held up and Gostisa was sent home with $160,000 for his third-place showing. The World Poker Tour main event winner now has more than $3.2 million in recorded tournament earnings.

With that heads-up play began with Vogelsang holding roughly a 2:1 chip advantage over Bujtas, who had just finished runner-up in a $50,000 buy-in six-max event at the Triton Cyprus series days earlier for $770,000. Vogelsang was able to further extend his lead by the time the final hand was dealt. All of the chips got in preflop with Vogelsang four-bet shoving ADiamond SuitKSpade SuitJClub Suit3Diamond Suit. Bujtas called with KHeart SuitKDiamond Suit7Club Suit2Spade Suit after committing nearly halfof his stack with a three-bet. The board ran out AClub SuitQClub Suit5Diamond Suit6Club Suit3Club Suit to lock up the pot and the title for Vogelsang. Bujtas earned $240,000 for his second runner-up finish in a week’s time. He now has nearly $4.2 million in career live cashes under his belt, including his second-place finish in the 2018 World Series of Poker Europe main event.