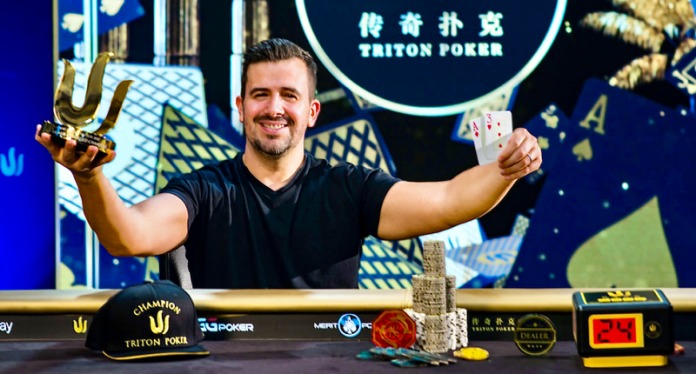 Triton Poker had established itself as one of the premier tours for high-stakes poker tournament action prior to the live poker shutdown of 2020 that resulted from the COVID-19 outbreak. As a result of the pandemic, it has been more than 2.5 years since the last time a Triton series took place, with the most recent being the partypoker LIVE MILLIONS Europe Triton festival held in August of 2019. Finally, in April of 2022, the high roller staple has returned for another nosebleed-stakes tournament festival.

The first event of the 2022 Triton Poker Cyprus series was the $50,000 buy-in no-limit hold’em six-max tournament. A total of 82 entries were made by the time that registration officially closed, building a massive prize pool of $3,936,000 that was paid out among the top 11 finishers. After two long days of action, Hungarian poker pro Andras Nemeth emerged victorious with the title and the top prize of $1,082,000.

This was Nemeth’s first recorded seven-figure live tournament payday. Nemeth now has more than $6.1 million in live earnings to his name, with a sizable amount of online success also under his belt. Nemeth also became the first Hungarian to ever win a Triton event, defeating his friend and fellow countryman Laszlo Bujtas heads-up for the title.

“It was surreal to play for the first time and to then get heads-up against one of my best friends in poker. I had to pinch myself,” he told Triton Poker staff after coming out on top.

In addition to the title and the money, Nemeth also secured 816 Card Player Player of the Year points as the champion of this event. This was his fourth final-table finish and third title of the year, having come out on top in two events at the European Poker Tour Prague festival in March. Nemeth now sits in 35th place in the 2022 POY race standings, which are sponsored by Global Poker.

The second and final day of this event began with 33 players remaining, with eight late registrants joining before cards got in the air. The money bubble burst with the elimination of Mikita Badziakouski running A-5 into the A-8 of Michael Soyza. Badziakouski hit the rail empty-handed in this event, while the remaining 11 players all locked up at least $99,000.

Tsang was the first to fall at the final table, with his A-9 suited running into the A-Q of Nemeth. Neither player improved and Tsang settled for $240,100 as the sixth-pale finisher. Just a handful of minutes later, a short-stacked Koon got all-in with his K-Q trailing the pocket queens of Bujtas. The pocket pair held up and Koon was eliminated in fifth place ($307,000). With $35.5 million in lifetime cashes, Koon is now ranked eighth on poker’s all-time money list.

The knockouts continued at a brisk pace, with two more eliminations in the next 10 minutes. Phil Ivey’s run in this event came to an end when he called a small blind shove from Bujtas holding A-J in the big blind. Bujtas made a flush with his 7Heart Suit5Heart Suit, which found three hearts on the board to secure the pot. Ivey earned $387,100 for his first live tournament score of 2022. He now has more than $32.1 million in career tournament earnings, good for 12th on the leaderboard.

Just moments after Ivey was sent home, Dong Hyun Kim got all-in with his pocket sevens leading the pocket fours of Nemeth. The 5Spade Suit3Spade Suit2Club Suit6Heart Suit10Heart Suit runout gave Nemeth a six-high straight on the turn for the win. Kim was awarded $503,800, the largest payday of the Korean’s career.

Nemeth took roughly a 3:1 chip lead into heads-up play with Bujtas. In the final hand, Nemeth shoved from the button with ADiamond Suit3Heart Suit and Bujtas called with KHeart SuitQHeart Suit for his last 20 or so big blinds. The board came down AClub Suit9Spade Suit4Club Suit2Diamond Suit7Heart Suit to lock up the pot and the title for Nemeth. Bujtas earned $770,000 as the runner-up, the second-largest score of his career behind his runner-up finish in the 2018 WSOP Europe main event for $797,609. He now has more than $3.9 million in recorded tournament earnings.