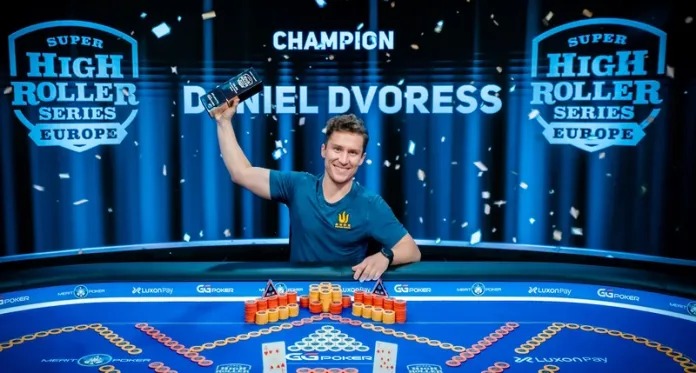 Daniel Dvoress became just the 35th player in poker history to accumulate more than $20 million in recorded tournament earnings. The 33-year-old Canadian poker pro surpassed this huge milestone thanks to a win in the 2022 Super High Roller Series Europe $50,000 buy-in no-limit hold’em event. He outlasted a field of 43 total entries to earn $731,000, which brought his lifetime total to $20,185,994

This was the seventh-largest score of Dvoress’ career, with his biggest payday being the $4,080,000 he earned as the champion of the 2019 Super High Roller Bahamas $250,000 buy-in event. He is also a World Series of Poker bracelet winner, having taken down the 2020 WSOP Online $1,500 buy-in ‘Millionaire Maker’ event for nearly $1.5 million.

Dvoress also earned a bounty of rankings points for this latest victory. This was his fifth final-table showing of the year, with more than $1.7 million in earnings accrued along the way. The 510 Card Player Player of the Year points he secured as the champion saw him move into 44th place in the 2022 POY race, which is sponsored by Global Poker. He also took home 439 PokerGO Tour points, enough to move him into 12th place on that high-roller-focused leaderboard.

The final day of this event began with seven players remaining. The money bubble had burst at the conclusion of day 1, with Cry Katz being the last player eliminated outside of the money. He ran pocket eights into the pocket queens of Timothy Adams, who bagged up the chip lead into day 2.

Tom Vogelsang, who won event no. 1 of this series, was the first to fall at the final table. He got all-in with pocket sixes facing the A-K suited of Dvores, which made an ace-high straight on the turn. Vogelsang earned $86,000 as the seventh-place finisher.

European Poker Tour Sochi champion Artur Martirosian’s run in this event came to an end when his pocket eights lost a race to the A-Q suited of Dvoress, who made the nut flush on the turn to leave Martirosian drawing dead. He was awarded $129,000 for his sixth-place showing.

Viacheslav Buldygin got the last of his short stack in ahead, with pocket queens leading the pocket tens of Jason Koon. A ten in the window gave Koon a set and a big lead. Buldygin picked up a club draw on the turn, but a board pair on the river gave Koon a winning full house to narrow the field to four. Buldygin took home $172,000 for his latest deep run in a high-stakes event.

Timothy Adams, who won the EPT Prague €50,000 buy-in high roller just over a month prior to this event, was the next to be eliminated. He four-bet shoved with KDiamond SuitQDiamond Suit and received a quick call from Dvoress, who had picked up ASpade SuitADiamond Suit. Dvoress flopped a set, while Adams picked up a gutshot draw. He failed to improve on the turn or river and was knocked out in fourth place ($236,500). This was Adams’ fourth final-table finish of the year, with two wins along the way, including a victory in a $25,000 turbo event just a day prior to this tournament for $310,000. He now sits in 58th place in the POY race.

Jason Koon was at his sixth final table of the month, with two fifth-place showings and three consecutive third-place finishes prior to making the top three in this event. The bracelet winner got the last of his stack in on a 7Spade Suit3Diamond Suit2Spade Suit flop with QDiamond Suit3Spade Suit trailing the KHeart Suit7Heart Suit of fellow bracelet winner Sam Greenwood. Koon was awarded $322,500 as the third-place finisher when Greenwood improved to kings up on the river. Koon has now cashed for more than $1.7 million this month, climbing into 14th place in the POY standings and 10th place on the PGT leaderboard.

Heads-up play began with Dvoress holding 3,890,000 to Greenwood’s 2,560,000. The pair of Canadian high-stakes stars went on to battle for roughly three hours. The decisive hand saw Dvoress flop trip sevens in a limped pot with AClub Suit7Diamond Suit on a KDiamond Suit7Heart Suit7Club Suit board. Greenwood checked with QSpade SuitJDiamond Suit and Dvoress bet small. Greenwood came along and the QHeart Suit on the turn gave him queens and sevens. He checked again and Dvoress sized up, firing 625,000 into the pot of 750,000. Greenwood called and the 5Club Suit completed the board. Greenwood checked a third time and Dvoress mode all-in for just over the size of the pot. Greenwood, who had him covered by 300,000 to start the hand, went into the tank before ultimately making the call. The very next hand, Greenwood shoved from the button with 4-3 offsuit and Dvoress called with 7-4. Dvoress made sevens and fours on the turn to leave Greenwood drawing dead. Greenwood earned $473,000 as the runner-up finisher.