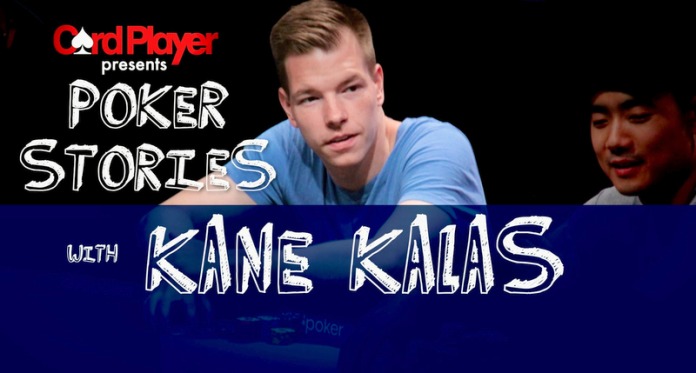 Kane Kalas grew up near Philadelphia where his father and baseball hall of famer Harry Kalas worked as the play by play commentator for the Phillies for nearly 40 years. He could have joined the family business like his brother Todd, who broadcasts for the Houston Astros, but while he was in college he got bit by the poker bug.

Kalas was particularly aggressive building his bankroll online, and only took a few months before he was playing at Rail Heaven on Full Tilt for stakes as high as $500-$1,000 no-limit. The baritone opera singer ventured into the live arena after Black Friday and found success on the tournament trail, including a runner-up finish at the WPT Borgata Poker Open for more than $500,000. Then in 2018, Kalas won the biggest cash game pot in televised poker history, banking $2.18 million in a hand against Jason Koon at the Triton Montenegro series.

Over the years the hedge fund manager has also done broadcasting work for a number of poker shows and tours including the WSOP, Triton, WPT Deepstacks, HPT, Hard Rock Poker Open, Poker Night In America, Hustler Casino Live, Live at the Bike, and PokerGO. Although he doesn’t work in baseball, the 32-year-old still lends his voice to the Phillies every season on opening day to sing the Star Spangled Banner.

Catch up on past episodes featuring notables such as Doyle Brunson, Daniel Negreanu, Jennifer Harman, Patrik Antonius, Justin Bonomo, Antonio Esfandiari, Nick Schulman, Fedor Holz, Barry Greenstein, Dan Smith, Scotty Nguyen, Mike Sexton, Maria Ho, Bryn Kenney, and many more. If you like what you hear, be sure to subscribe to get the latest episodes automatically when they are released.