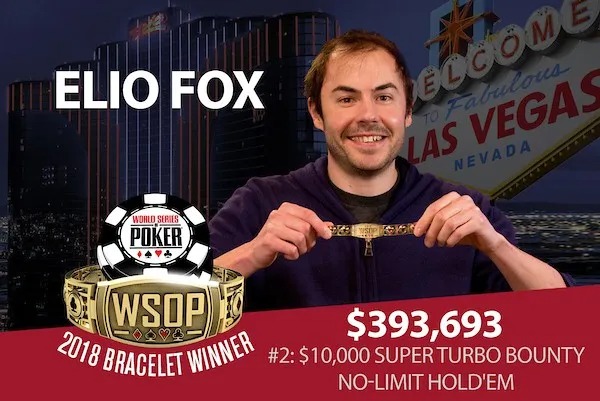 The 49th annual World Series of Poker has crowned its first champion of the year: Elio Fox. The 2011 WSOP Europe main event champion defeated a field of 243 entries in the 2018 WSOP$10,000 turbo bounty no-limit hold’em event, taking home his second gold bracelet, the $393,693 first-place prize and an unknown amount of $3,000 bounties that he won along the way.

“I’m really happy about this one because I haven’t won a live poker tournament in a really, really long time, so it feels good,” Fox told WSOP reporters in the early morning hours. “And I think the first one was just such a shock that I wasn’t really that excited about it in the moment, but I’m really happy about it now. It’s a great way to kick off a summer.”

“It was a big field and I think just doing turbos is great because I think it’s good for non-professional players because they can finish an event quickly,” Fox said of the new tournament. “I think the bounty turbo format appears a lot online, so, I’ve definitely played it a lot. I think it’s a great addition to the World Series of Poker schedule.”

This event kicked off at 3:00 p.m. on Wednesday, May 30th. It was scheduled to only last one day, with 20 minute blind levels helping to force the action. The turnout of 243 players built a $2,284,200 prize pool that was ultimately awarded to the top 37 finishers.

In the end it came down to a heads-up showdown between Fox and Adam Adler. Fox took roughly a 7-to-1 chip lead into the final battle after eliminating Volpe in third place. Adler mounted an impressive comeback, quickly doubling up and then keeping the pressure on until he had taken the lead. Fox was able to regain control by the time the final hand arose. The chips got in with Fox holding the 22 against Adler’s A10. The board ran out 65326 to give Fox the full house and the pot. Adler was eliminated in second place, taking home $243,323.