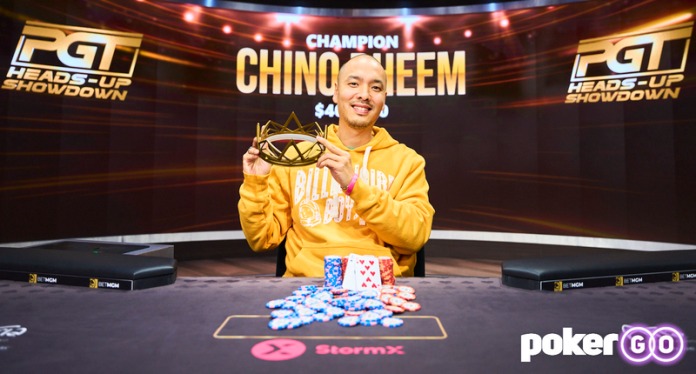 The inaugural PokerGO Tour Heads-Up Showdown saw high-stakes one-on-one no-limit hold’em action return to poker fans’ screens around the globe. The $25,000 buy-in invitational shootout event ran from Apr. 21-23 at the PokerGO Studio at the ARIA Resort and Casino in Las Vegas. Three-time World Poker Tour main event champion Chino Rheem battled his way through the 32-entry field to capture the title and the top prize of $400,000.

The win saw the 42-year-old poker pro increase his lifetime live tournament earnings to more than $12 million. He has accumulated five separate seven-figure scores in his career, including a nearly $1.8 million payday as the seventh-place finisher in the 2008 World Series of Poker main event. He also won the 2019 European Poker Tour PokerStars Caribbean Adventure main event for more than $1.5 million.

“I’m feeling good,” Rheem told PGT reporters after coming out on top. “It’s a really good feeling. Honestly, it’s just a privilege and an honor to play in these events, especially given where I was at less than a year ago. I’m really grateful. It just feels good to be able to come and play and actually win.”

While Rheem’s prowess on the felt is undeniable, he has been at the center of controversies over the years. He was put on probation by the short-lived Epic Poker League after taking down one of their few events for a million-dollar payday due to his alleged failure to pay down debts he owed to other professional players.

“It’s no secret in the poker world that I’ve had my ups and downs,” Rheem continued. “At one point in my life, I was in a really dark place. I’m just really, really grateful to have been shown the light and find god and the people that he’s put in my life to help me sustain a much more healthy, sober life. I owe it all to that, really.”

Rheem won five consecutive heads-up matches in order to secure the title coming from the ‘Diamonds’ corner of the bracket. He started his journey off by defeating three-time bracelet winner and WPT champion Nick Schulman in the round of 32. He then squared off against another three-time bracelet winner in Jeremy Ausmus. Rheem defeated the current Card Player Player of the Year race second-ranked contender to move into the quarterfinals.

Rheem overcame successful businessman and frequent high-stakes tournament contender Bill Klein to set up a semi-final showdown with WPT champion Justin Young. This would not be the first time the pair squared off, as they battled heads-up back in 2008 with the WPT Five Diamond World Poker Classic title on the line. Rheem came out on top then, earning more than $1.5 million and his first of three victories on that tour. he also was the winner this time around, sending Young to the rail with $100,000 for his deep run in this event. The score put his lifetime live earnings at just shy of $6 million.

With that, Rheem punched his ticket to the finals. All-time WPT main tour titles leader Darren Elias was the last player between Rheem and the title. The two played for roughly 100 minutes. Elias had taken the lead early, but Rheem surged back into the chip lead thanks to a double up at roughly the one hour mark. He shoved the river for 63,500 into a pot of 220,000 on a AClub SuitKClub Suit6Heart Suit3Spade Suit8Club Suit board with ADiamond SuitJClub Suit. Elias called after plenty of consideration with KSpade Suit10Heart Suit to see Rheem take more than a 2:1 lead of his own.

Rheem extended that advantage even further by the time the final hand was dealt. Elias open-shoved for just shy of 12 big blinds with Q-5 offsuit and Rheem called with A-8. A jack-high runout kept ace high in the lead and Elias was eliminated as the runner-up ($200,000). He now has more than $10.1 million in lifetime earnings. Elias is well situated to add to that total in a major way next month as the chip leader of the delayed final table of this year’s WPT Seminole Hard Rock Poker Showdown. The final six were set on Apr. 12, but the champion in that event will be decided on May 25. Elias will be playing for his record-extending fifth WPT title and the top prize of $1,000,300.

Here is a look at the payouts awarded in this event: