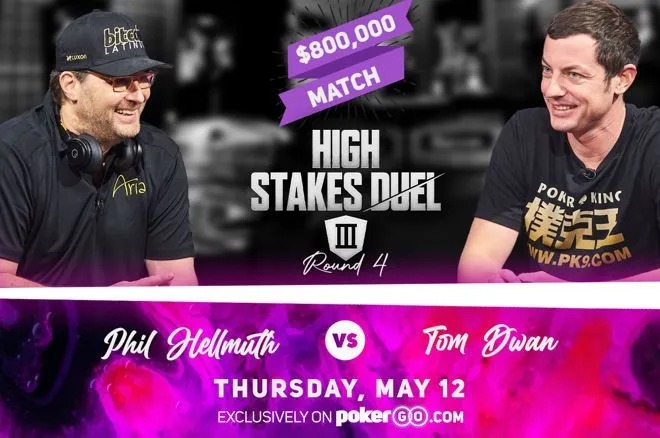 Poker Hall of Fame member Phil Hellmuth has won eight of his nine matches played so far on PokerGO’s High Stakes Duel, including seven consecutive victories to start his run. Tom Dwan was the player to snap that streak when he met Hellmuth last August, beating Hellmuth in a $100,000 buy-in match when his pocket tens cracked the 16-time World Series of Poker bracelet winner’s pocket aces.

Hellmuth got back to his winning ways in January of 2022, besting Dwan in a $200,000 buy-in heads-up rematch. According to the rules of this show, Dwan had the option to challenge Hellmuth to a rematch for double the stakes. The high stakes cash game regular did so shortly after his loss, setting up a $400,000 buy-in round 4 clash between the pair. On Tuesday, Apr. 26 PokerGO announced that the match has officially been scheduled for May 12. The showdown will be broadcast in its entirety exclusively on PokerGO.com starting at 8:00 PM Eastern (5:00 PM Pacific).

The rules of the show stipulate that the buy-in for the match will always double, with a victorious player only able to walk away if they win three straight matches prior to round 4, or two straight matches after round 4. With Dwan scoring a win in round 2, there will be a round 5 regardless of who comes out on top in the upcoming match. The loser will have the first shot at accepting a rematch, but if they decide to pass, a new player will be invited to step in against the winner at the $800,000 buy-in price point. Hellmuth and Dwan would both need to win two consecutive matches, starting with their May 12 showdown, in order to be eligible to walk away victorious.

Hellmuth won the first edition of this heads-up clash by beating three-time bracelet winner and two-time World Poker Tour champion Antonio Esfandiari in a clean three-match sweep. He then went on to beat six-time bracelet winner and two-time WPT champion Daniel Negreanu in another three-match shutout. He then beat sports commentator Nick Wright in round 1 of High Stakes Duel III before Dwan stepped in to end his winning spree.