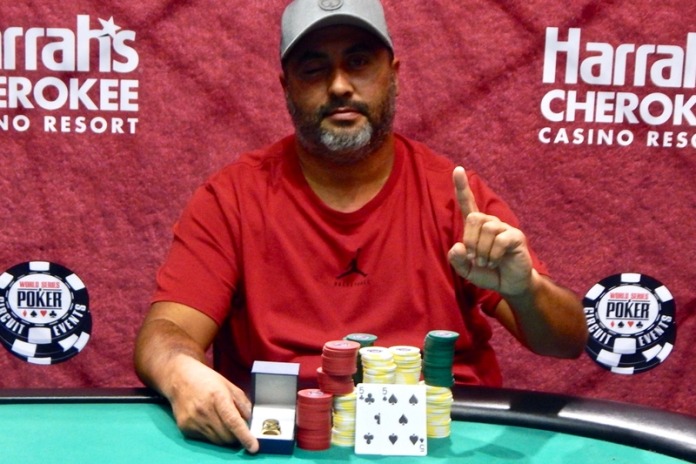 Billy Cashwell is the latest champion on the World Series of Poker Circuit. The 42-year-old construction worker from Stedman, North Carolina defeated a field of 1,057 total entries to win the WSOP Circuit Harrah’s Cherokee $1,700 no-limit hold’em main event. For the win, he earned $271,234 and his first WSOPC gold ring.

In addition to the money and the hardware, Cashwell also earned 960 Card Player Player of the Year points as the champion of this event. This was his first POY-qualified score of the year, but it alone was enough to see him move into 341st place in the 2019 POY race standings, which are sponsored by Global Poker.

When the unofficial final table of ten players was set, Cashwell had climbed into second place behind Thomas Alcorn. Cashwell got off to a quick start after the field had combined onto a single table, picking up pocket kings against pocket eights to knock out Dinh Ba in 10th place ($22,347).

With seven players remaining Forrest Raleigh got involved in a preflop coin flip against Alcorn, with his AClub SuitKSpade Suit going up against the QSpade SuitQClub Suit of Alcorn. Raleigh managed to spike an ace on the river to double into the chip lead. Alcorn remained one of the larger stacks at the table.

Alcorn scored the next two knockouts, busting Brad Albrinck (5th – $73,467) and Dann Turner (4th – $95,847) to close the gap with Raleigh and Cashwell a bit heading into three-handed action. He was unable to maintain that momentum over the next hour, and was down to just 11 big blinds when his final hand was dealt. He got all-in with 6Spade Suit6Club Suit and was called by the Raliegh, whose KSpade SuitJHeart Suit made a full house by the turn to leave Alcorn drawing dead. He earned $126,188 for his third-place finish.

Raleigh took a lead into heads-up play against Cashwell, and was able to expand that advantage to more than 6-to-1 at one point. Cashwell doubled up and then fought his way back into contention. He surged into the lead after winning a massive pot with two pair over two pair. With 9Club Suit7Heart Suit2Heart Suit5Spade Suit showing on the board the two got all-in. Cashwell held 9Heart Suit7Diamond Suit for top two pair, while Raleigh had 9Diamond Suit5[[suit:club]. The river was the 8Club Suit, securing the double up and the lead for Cashwell.

In the final hand of the event, Raliegh shoved his last 16 big blinds with JSpade Suit7Diamond Suit and Cashwell called with 5Spade Suit5Club Suit. The board came down 9Club Suit8Diamond Suit6Spade Suit7Club SuitAClub Suit and Cashwell made a straight to lock up the pot and the title. Raleigh was awarded $167,637 as the runner-up.