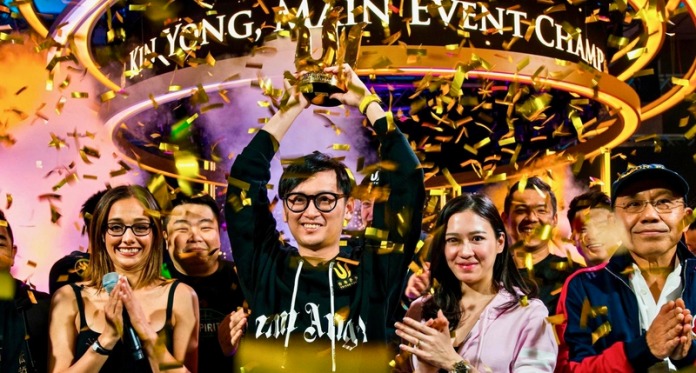 Yong now has live tournament earnings in excess of $6.5 million USD, with three total titles won on the Triton tour. In addition to the title and the money, he was also awarded 1,320 Card Player Player of the Year points for the win. This was is third final-table finish of the year, and as a result, he now sits in 81st place in the 2019 POY race standings sponsored by Global Poker.

The final table of this event began with Phua sitting atop the leaderboard with nine players remaining. Wai Leong Chan was the first to be eliminated when his A-J lost a preflop race against the pocket sixes of Yong, who flopped a set and held from there. Chan earned $372,100 USD for his ninth-place showing.

The next major showdown was a three-way all-in involving Daniel “Jungleman” Cates, Stephen Chidwick and Michael Soyza. Cates was the shortest of the three. He got all-in with ASpade Suit3Diamond Suit, only to have Chidwick shove for more behind him with AClub Suit7Heart Suit. Michael Soyza had both his opponents covered and held the best hand with ADiamond SuitQDiamond Suit. He made the call and held after a stressful KHeart Suit5Heart Suit4Heart Suit6Spade Suit6Club Suit runout. Cates took home $500,200 USD as the eighth-place finisher, while Chidwick was awarded $663,680 USD for finishing seventh.

Chidwick has already made 12 final tables in 2019, with three titles won and $5,562,947 in year-to-date earnings. The 330 POY points he earned in this event helped him further his hold on the overall lead in the POY race. He now sits 407 points ahead of his nearest competitor, recent Triton Million runner-up Bryn Kenney.

Paul Phua earned his first knockout of the day when his pocket queens bested the pocket nines of Michael Chi Zhang in a preflop all-in showdown. Phua flopped queens full and turned quads to leave Zhang drawing dead. He took home $867,420 as the sixth-place finisher.

2019 World Series of Poker $50,000 high roller bracelet winner Ben Heath got his last chips into the pot with KSpade SuitKDiamond Suit up against the ASpade SuitKClub Suit of Phua. Heath was in the lead, at least until the QSpade SuitJHeart Suit10Heart Suit flop gave Phua the straight in the flop. The 6Diamond Suit turn and JDiamond Suit river locked up the pot for Phua, while Heath was sent packing with $1,647,000 USD for his efforts.

At some point the two heads-up players stuck a deal that saw Phua secure $3,121,132 USD and Yong $3,161,868 USD. Phua began with the lead following his elimination of Heath, and was able to stretch his advantage to roughly 6-to-1 before Yong mounted a furious comeback which began with him picking off a bluff from Phua.

It didn’t Yong all that long to completely turn the tables. By the timethe final hand was dealt, Yong held roughly a 6-to-1 lead of his own. Phua moved all-in for just over ten big blinds with QClub Suit6Club Suit and Yong called holding KSpade SuitJClub Suit. Phua picked up a lot of outs on a 9Club Suit7Club Suit7Heart Suit flop. The 6Diamond Suit gave him the lead on the turn, but the JSpade Suit on the end secured the pot and the title for Yong.