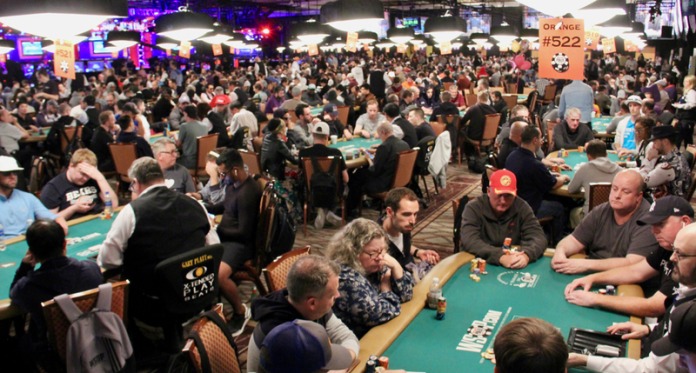 The 2019 World Series of Poker $10,000 buy-in main event drew the second-largest field in its history, attracting 8,569 players. After three full days of tournament action, that field has already been narrowed down to just 1,286 players, all of whom are now in the money. The money bubble burst shortly before 1:00 a.m. local time when Ryan Pochedly called off the last of his stack with A-K on a 8Diamond Suit7Heart Suit3Spade SuitKDiamond Suit7Club Suit board, only to find out that his opponent Julian Pineda had made trips with his 7Spade Suit6Spade Suit.

Pochedly was awarded entry into the 2020 main event as a consolation prize from the WSOP, along with a signature board in the shape of a bracelet that featured the signatures of many of the games biggest stars.

Two-time WSOP main event ‘last woman standing’ Kelly Minkin spent much of her day at one of the three featured tables in the Amazon room. Minkin finished the day with 456,000, securing her third cash in this event in the last five years. She finished 29th in 2015 and 50th last year.

“I can’t say I’m surprised, because I expect myself to go deep every time I play the main event, but it’s a relief that we’re finally in the money,” said Minkin after play ended.

“I want to be the last person standing and win the main event, that would be incredible,” said Minkin when asked for her thoughts on being the last highest-finishing female player in this event multiple times. “But I do think there is something to say about being the last woman, given that I guess this year there were only 350 total women in the field. So, if how I finish and my success in this event can encourage other women to get into poker, that’s amazing.”

Among the 1,594 players that were eliminated on day 3 were plenty of notables like Igor Kurganov, Asi Mishe, Phil Hui, Loni Harwood, David Bach, Calvin Anderson, TJ Cloutier, and Nick Schulman, who was set-over-setted by Joseph Cheong to lose a huge chunk of his stack late in the day.