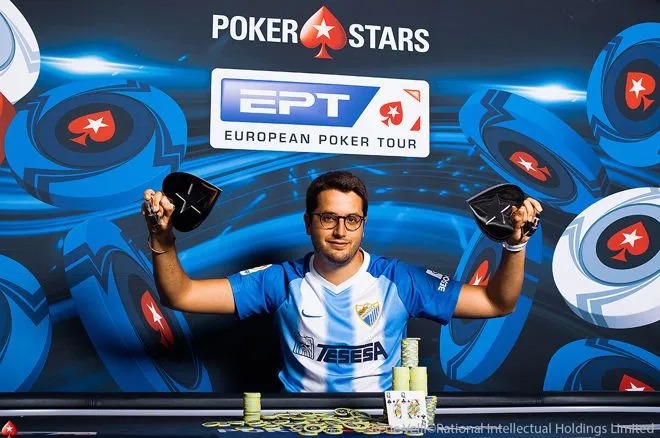 Spanish poker pro Juan Pardo secured the two largest poker tournament scores of his career in the span of just over 24 hours. The 25-year-old from the city of Malaga managed to win back-to-back single-day no-limit hold’em high roller events at the 2019 European Poker Tour Barcelona, earning more than $1.6 million USD for emerging victorious in both tournaments.

“I’m beyond happy,” Pardo told PokerStars reporters. “I know this is something that might happen once in a lifetime.”

Joining the poker professionals at the final table were two sports stars in Gerard Piqué and Arturo Vida. The two were less than a day removed from winning a match, with their team FC Barcelona beating Real Betis Sevilla 5-2, thanks in part to a goal scored by Vidal.

Vidal ultimately finished fifth in the tournament for $149,251 USD, while Piqué made it down to heads-up with Pardo. He ultimately was eliminated in second place, earning $391,775 USD for his impressive showing. This was his fourth career final-table finish, bringing his career live tournament earnings to $667,103.

Mere hours after securing his first title, Pardo woke up and got right back to the tables for more high-stakes poker action. The EPT Barcelona €50,000 single-day no-limit hold’em high roller drew 76 total entries, creating a final prize pool worth more than $4 million USD. Pardo managed to navigate to the winner’s circle yet again, taking home €1,013,860 ($1,125,385 USD) for his second win in as many days. The score increased his career earnings to $3.5 million.

Pardo also earned 714 POY points as the champion. He has now won five titles and made seven final tables in 2019. All three of Pardo’s previous wins this year came in high roller events held at Aria in June and July. As a result of his consistent success, Pardo now sits in 46th place in the overall 2019 POY race standings, which are sponsored by Global Poker.

Pardo knocked out recent Triton Million tenth-place finisher Chin Wei Lim in third place to set up a heads-up showdown with Seth Davies. It came down to a classic preflop race situation for the title, with Davies holding AHeart SuitKSpade Suit to Pardo’s QSpade SuitQClub Suit. Pardo flopped top set and turned a full house to lock up the win, while Davie settled for $800,044 USD as the runner-up.