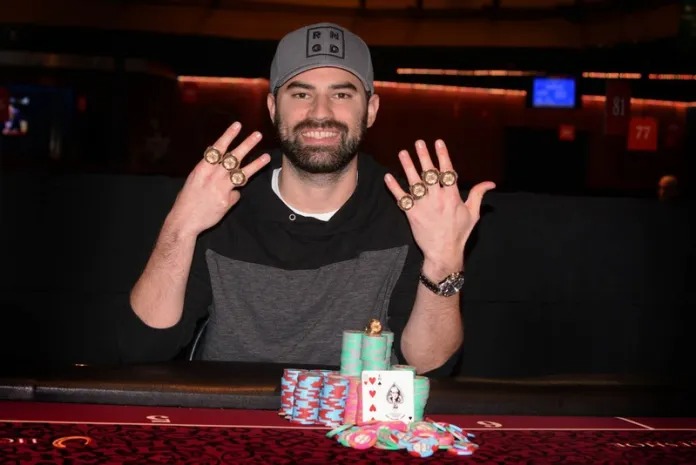 When it comes to the World Series of Poker Circuit’s best players, Kyle Cartwright is one of the first players mentioned. The Memphis, Tennessee resident is the owner of eight rings and earned more than $1.1 million in Circuit events alone.

Cartwright added his eighth ring last January after defeating 639 entries in the WSOP CircuitTunica main event for $198,451. Of his eight rings, four have come in main events.

However, Cartwright’s dominance stretches far beyond the low and mid-stakes that the WSOPCircuit caters to. The 31-year-old has more than $2.1 million in live cashes, including a WSOPbracelet he earned in 2014 when he took down a $1,000 no-limit hold’em event for $360,278.

Cartwright sat down with Card Player to go through his thought process from two key hands he played at the final table from his latest victory in Tunica.

Steve Schult: If you’re raising 3Club Suit 2Club Suit, are there any hands you are going to fold in this spot? Give me your perspective on your range here on the button and is it normally this wide?

Kyle Cartwright: I was opening almost 100 percent of buttons at this point of the tournament. I drew a favorable seat and had the two most passive players on my left. I ended up adjusting later in the tournament when it was three- and four-handed.

SS: When he checks to you on the flop, you decide to bet. With three-high and a good chunk of equity, this seems like a good idea, but why downbet? Why not push your equity and get a few more folds with a bigger bet.

KC: I was down sizing almost 100 percent of continuation bets the entire final table. I wanted to be consistent with my strong hands and also my weaker hands. Jim was also not playing back at me whatsoever so I can find out the information I need with a small bet. Also, if he happened to raise me I can continue having a fair amount of equity with my flush draw in position. I do not remember the exact stack sizes, but I am fairly confident we were both deep at this point in time.

SS: You make a pair on the turn and action gets checked through. Why did you decide to check when you picked up more equity now with a pair and a draw? Would you have checked back if you didn’t make a pair, but still bricked the flush draw? Give me your overall game plan on how you were planning on proceeding on the turn.

KC: When Jim called my flop bet, it appeared that he wanted to raise me. So I opted to check back on this street. If I bet, it would put tons of pressure on a 10 or a six, but I was fairly confident he had an ace or in some cases better flush draws, neither of which would fold. I wanted to take the less variance-route in this situation. In order to get him off top pair without me improving on the river would have taken three streets of betting and even then he more than likely would have called given how aggressive I had been throughout the day.

SS: How does your check on the turn affect your plans for the river? Would a bet here change whether or not you would turn your hand into a bluff on the river?

KC: After I checked the turn, I don’t want to say I was giving up without improving, but I just knew he was going to call the turn if I had chosen to bet. Again, it looked like he wanted to check-raise me on the flop. I actually know Jim very well and like to think I know how he plays. We both actually final tabled this very same tournament the year prior. He also plays in Tunica a lot.

SS: What is your reasoning for a pot-sized river bet. What type of hands do you think he can call the river with?

KC: When he checked to me on the river, it looked as if he wanted to bet so I thought I could get a big river bet paid off. I don’t think he’s calling a ten or a six, but I also didn’t think he had either of those to begin with. When I made the pot-size river bet, he snap-called me by throwing in a single chip, so I can only assume he had an ace. The Action: Kyle Cartwright raised to 240,000 on the button, Steve Klein called from the small blind and Johnny Landreth called out of the big blind. The flop was QHeart Suit 9Spade Suit 7Heart Suit and action checked to Cartwright, who bet 200,000. Klein folded and Landreth called. They both checked the ASpade Suit turn card and the 5Diamond Suit came on the river. Landreth bet 375,000 and Cartwright called.

SS: This is another extremely light open on the button. Again, is this a standard raise for you or were there ICM (Independent Chip Model) considerations that influenced your decision?

KC: I actually had folded a ton of buttons three-handed before this hand. I just wasn’t getting much to open considering who was in the big blind. Johnny doesn’t like to fold much. We have a ton of history together. ICM definitely played a factor for me against Steve, but not Johnny. If I remember correctly, Steve’s lifetime earnings was around $35,000 before this last cash. I could tell he was just thrilled to bet there as any recreational player should be.

SS: On the flop, you have a hand with showdown value, but one that seems like it wouldn’t be able to stand a ton of heat from either player. Why did you decide to bet this hand as opposed to checking and taking a pot control line?

KC: I more than likely would have checked behind if this was a heads-up pot, but opted to bet since it was three-handed. I knew both of their games pretty well at this point. The small blind would have rarely, if ever, check-raised a draw and Johnny the same. If I got raised, it would have just been an easy fold depending on the sizing.

SS: What is your overall plan for the hand after you bet? What sort of range are you putting him on?

KC: Once Johnny called the flop, I put him on one pair type hands, or a straight or flush draw. My continuation bet was significantly small again as I had been doing for the entire final table. I was never going to turn this into a bluff, since I had decent showdown value and he doesn’t like to fold much. I thought I could beat a ton of his check-calling hands from the big blind.

Depending on the runout, I was planning on betting again for value since Johnny isn’t the stereotypical older gentleman. He can be quite maniacal at times, which makes him a tough opponent to play against. Going to showdown isn’t something I normally try to do especially when I’m the preflop aggressor and also with a not-so-great starting hand. I prefer to go to showdown as little as possible.

SS: When he leads into you on the river, how much showdown value does your hand have at this point? Are you beating any of his value bets or is your hand just a bluff catcher?

KC: I think my hand has a ton of showdown value against this specific opponent. He could easily be betting worse and also has a ton of bluffs. Most every draw missed and again, this is not your typical elderly gentleman. He can bluff with the best of them. I remember even thinking about betting if he checked to me. He’s capable of calling with K-X hands and worse pairs. When he led out, it was a fairly easy call in my opinion. I did take a moment to call, but there was strategy behind that at the time.

SS: What kind of bluffs can you put him on by the river? What value hands can he show up with here?

KC: There are a ton of bluffs that Johnny could easily have. All straight draws missed except 8-6. He could have J-10, K-10, 10-8. All of these hands would be continuing after the flop. The flush also missed.

The turn was an ace, but I wasn’t too worried about him having an ace unless he turned two pair. He never has A-Q given how the preflop action went. When I called his river lead, he should up with a hand I knew he could have. It was just another favorable runout for my hand.

Value hands that he could have are all queens. He was defending nearly 100 percent of big blinds so even a hand such as Q-2 offsuit is in his range. But I thought he would be check-raising all top pair hands or better given my downsize.