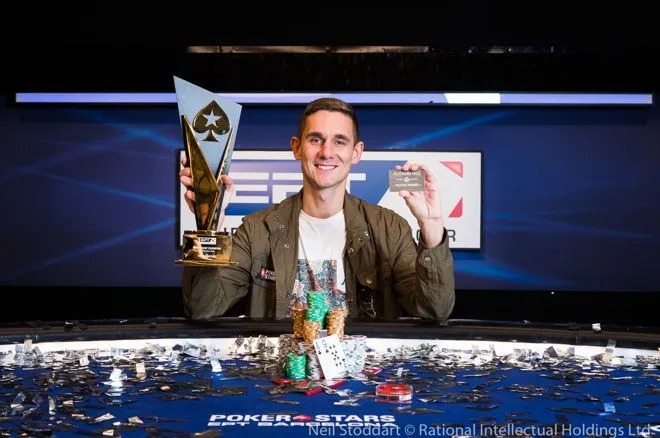 In addition to the money, Nurzynski also earned a Platinum Pass (a $30,000 value) for the 2019 PokerStars Players NL Hold’em Championship (PSPC), a gigantic $25,000 buy-in tournament taking place in the Bahamas next January.

The final day of this tournament began with six players remaining. Matthias Tikerpe was the first player eliminated, running his AClub SuitKClub Suit into the 9Heart Suit9Club Suit of Nurzynski. The board brought no help for the Estonian and he was eliminated in sixth place, earning €287,050 ($335,849 USD). Nurzynski had begun the day in second chip position behind Haoxiang Wang, but with this pot took a commanding lead.

Wang closed the gap somewhat by knocking out Rodrigo Carmo in fifth place. Again it was ace-king versus a pocket pair, this time the8Spade Suit8Diamond Suit for Wang. Carmo’s ADiamond SuitKClub Suit did not improve and he was sent to the rail with €354,200 ($414,414 USD).

The final four players battled it out for a while before opting to strike a deal that saw the title and trophy, the Platinum Pass and €180,000 set aside to play for, while securing the following payouts for the remaining players:

Marques and Dimov finished in fourth and third place, respectively, taking home the agreed-upon payouts listed above. Wang had knocked both players out, and as a result, took nearly a 4-to-1 chip lead into heads-up play against Nurzynski. The short stack was able to find a double up, picking up pocket kings and getting all-in against Wang’s middle pair and a straight draw on the flop. Nurzynski’s overpair held up to close the gap considerably. Not long after that he overtook the lead.

By the time the final hand arose Nurzynski had more than a 4-to-1 chip advantage. With blinds of 250,000-500,000 Nurzynski limped in from the button with the AClub Suit9Club Suit. Wang checked with the KSpade Suit2Diamond Suit. Both players flopped a pair when the ADiamond SuitKClub Suit6Diamond Suit hit the board. Wang bet 500,000 from out of position and Nurzynski called with top pair. The turn brought the 7Club Suit to give Nurzynski the nut flush draw in addition to his pair of aces. Wang now opted to check. Nurzynski bet 2,000,000 and Wang made the call. The river was the 4Diamond Suit. Wang checked and Nurzynski moved all-in. Wang thought it over and eventually made the call, only to get the bad news that his pair of kings was second best. Wang earned €1,023,701 ($1,197,730 USD) for his runner-up showing in this event.