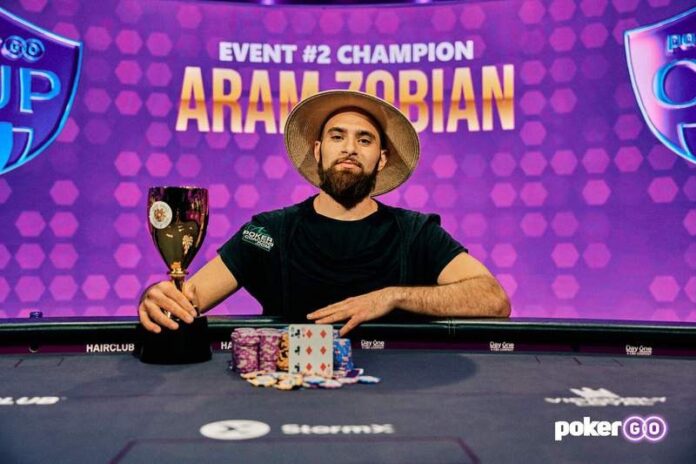 Aram Zobian has won the second $10,500 buy-in no-limit hold’em high roller event at the PokerGO Cup, defeating a field of 83 entries to secure the title and the top prize of $207,500. This was the third-largest recorded score yet for Zobian, who finished sixth in the 2018 World Series of Poker main event for a career-high payday of $1.8 million. He now has more than $4.2 million in lifetime tournament earnings to his name.

In addition to the money and the hardware, Zobian was also awarded plenty of rankings points for this victory. The 480 Card Player Player of the Year he took home were enough to move him into 20th place in the 2023 POY race standings sponsored by Global Poker.

Zobian also locked up 208 PokerGO Tour points, climbing to second place on that high-stakes-centric leaderboard. He also sits in second place in the PokerGO Cup player of the series race, trailing only event no. 1 winner Sean Winter.

Thanks to the strong turnout for this event, $830,000 in prize money was paid out among the top 12 finishers. Plenty of notables made the money, but fell short of making day 2, including 2022 U.S. Poker Open finale runner-up Masashi Oya (10th), four-time bracelet winner Ben Yu (8th), and popular poker vlogger and bracelet winner Ethan ‘Rampage’ Yau (7th).

The final table began with Zobian in the lead and just six contenders remaining. Cary Katz was the first to fall. The PokerGO founder and high-stakes tournament regular got all-in with his A-10 suited leading the A-9 of Punnat Punsri. The turn brought a nine to turn the tables, though, and a blank river saw Katz eliminated in sixth place ($49,800).

Punsri was not yet done taking the lead against A-10 suited on the turn. This time around, he got involved in a battle of the blinds against 2021 Wynn Millions main event winner Andrew Moreno. With blinds of 25,000-50,000 and a big blind ante of 50,000, Moreno raised to 170,000 from the small blind with ASpade Suit10Spade Suit. Punsri called with 10Heart Suit8Heart Suit and the pair saw an action flop of 10Diamond Suit5Heart Suit2Heart Suit. Moreno bet 220,000 with top pair, top kicker. Punsri raised to 575,000 with his top pair and a flush draw. Moreno shoved for 1,330,000 and Punsri called. The 9Heart Suit on the turn gave Punsri a flush to leave Moreno drawing dead, making the 6Heart Suit river a mere formality. Moreno earned $66,400 for his fifth-place showing, while Punsri moved into a virtual tie for the chip lead.

World Poker Tour champion Seth Davies’ was the next player to run into the Punsri buzzsaw. Punsri opened with a min-raise on the button with pocket aces. Davies three-bet shoved from the big blind for around 26 big blinds with pocket deuces and Punsri snap-called. Punsri flopped top set and held from there to narrow the field to three while taking sole possession of the top spot on the leaderboard.

Three-time World Series of Poker bracelet winner Kristen Foxen also fell to pocket aces. She ran AClub Suit8Club Suit into the AHeart SuitADiamond Suit of Zobian, who opened on the button and then called Foxen’s roughly 7x three-bet shove from the big blind. The board ran out QSpade Suit10Diamond Suit7Heart Suit9Diamond Suit10Spade Suit and Foxen was knocked out in third place ($99,600). She now has $6,166,588 in career tournament earnings to her name after this latest deep run.

With that, heads-up play began with Punsri holding 5,915,000 to Zobian’s 4,460,000. The two exchanged the lead a couple of times as the battle wore on, but Zobian won a massive pot with flopped trip aces against a multi-barrel bluff from Punsri to take the lead in time for the final hand of the event.