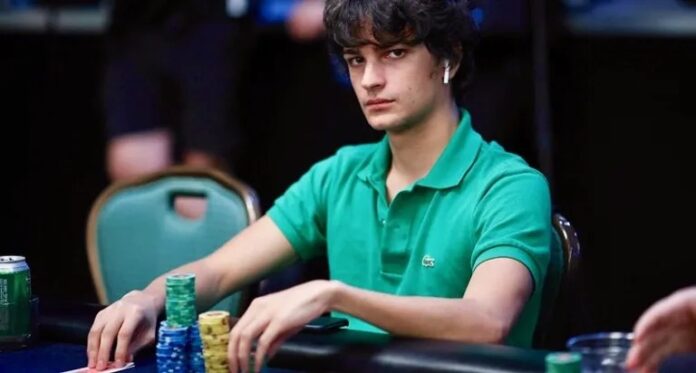 Enrico Camosci is the latest player to secure a gold bracelet during the 2020 World Series of Poker Online. The Italian overcame a field of 1,168 total entries to emerge victorious in the $2,100 buy-in no-limit hold’em bounty championship event. For the win Camosci secured his first piece of WSOP hardware and a total of $327,319 in earnings, with $184,579 in prize money and another $142,740 in bounties. This is the largest recorded score of Camosci’s career, overtaking the $252,340 he earned as the winner of a $10,300 buy-in side event at the 2019 PokerStars Caribbean Adventure.

Camosci came into the final table of this event as the chip leader after knocking out Alex Difelice in 10th place ($10,304). The first elimination at the official final table took place when 2017 WSOP main event seventh-place finisher Damian Salas run pocket fives into the pocket queens of Aki Virtanen. Salas made a full house by the river, but Virtanen made quads to lock up the pot and send Salas to the rail in ninth place with $36,527 in total earnings for the event, including both prize money and bounties.

2014 PokerStars Caribbean Adventure main event winner Dominik Panka was the next to fall. His last chips went in with AHeart Suit4Heart Suit, only to have Murilo Figueredo call with AClub SuitQClub Suit. Neither player improved and the ace-queen high of Figueredo was enough to send Panka home with $37,378 in total earnings as the eighth-place finisher.

High-stakes tournament regular Connor Drinan’s run in this event came to an end as a result of his losing a preflop coinflip with AClub SuitKSpade Suit against the 6Spade Suit6Diamond Suit of Virtanen. The pocket sixes held up and Drinan was knocked out in seventh place, taking home $44,312 in total earnings. Virtanen continued his bounty collecting spree by busting Renato Valentim in sixth place. The chips all got in preflop with Valentim holding ASpade Suit8Spade Suit against the KHeart SuitQSpade Suit of Virtanen. Both a king and a queen appeared on the flop to give Virtanen top two pair. He held from there and Valentim settled for $44,463 in earnings.

Camosci earned his first bounty at the official final table when his A-9 beat out the K-6 of short stack Murilo Figueredo. Camosci made aces up by the river to send his eliminate his opponent in fifth place ($69,849) and take a chip lead into four-handed action. He extended that advantage even further when his AClub Suit10Club Suit outran the QSpade SuitQDiamond Suit of Alexander Fitasov in a preflop showdown. Camosci flopped an ace, turned two pair, and avoided a queen or a jack on the river on the river to send Fitasov home with $77,293 as the fourth-place finisher.

Despite his early run of knockouts, it was Aki Virtanen that was the next to run out of chips in this event. He got all-in on a KDiamond SuitQDiamond Suit5Diamond Suit flop with the 10Diamond Suit9Diamond Suit for a flopped flush. He was up against the ADiamond Suit10Club Suit of Omer Ozsirkintis. The 9Spade Suit turn kept Virtanen ahead, but the 3Diamond Suit river gave his opponent the higher flush and the pot. Virtanen earned $144,249 as the third-place finisher.

With that Camosci entered heads-up play with roughly 18.5 million in chips to Ozsirkintis’ 10.7 million. In the end it came down to a coinflip, with Ozsirkintis getting all-in with ADiamond SuitKHeart Suit against the 7Spade Suit7Heart Suit of Camosci. The flop came down ASpade SuitJSpade Suit5Spade Suit to give Ozsirkintis top pair and Camosci a flush draw. The 10Club Suit on the turn changed nothing, but the 3Spade Suit on the river completed Camosci’s flush to secure him the pot and the title. Ozsirkintis was awarded $182,564 in prize money and bounties for his runner-up finish.

Here is a look at the payouts awarded at the final table: