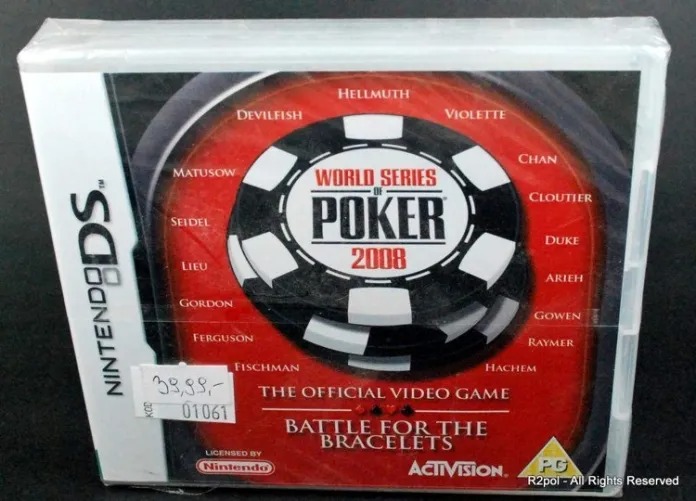 The World Series of Poker (WSOP) is the field of dreams for poker players.

Each summer, thousands of poker players — recreational weekend warriors, hardcore grinders, and well-bankrolled pros — descend on Las Vegas as temps creep up towards the three-digit mark. There, for seven weeks of juicy cash games and tournaments that pay out life-changing money, the Rio All-Suite Hotel and Casino becomes home.

The first wave of players file into the Rio’s conference center in late May. By the time the Colossus — a bracelet event that’s historically attracted more than 22,000 entries — begins, the wide hallways that lead from one event room to another start to become a sea of humanity.

Anytime you have a captive audience with a very targeted set of interests, you’re going to have vendors hoping to make bank on that demographic. And the WSOP is no exception. Year after year, everyone from those hawking sunglasses that hide your dilated pupils to every sort of cell phone accessory salespeople are at the ready, as eager to make a deal as a cake maker at a bridal conference.

As you walk down the Rio convention center halls on your way to play poker — and with every bathroom or food break that necessitates another stroll down the same — not always friendly salespeople, who desperately need to sell enough products to justify their company’s expensive monthly kiosk rental fee, will ask you the same genre of question you now hear in any major mall as you pass handcream and hair clip vendors.

“Do you need a new cell phone charger case?” is a frequently heard attempt to get you to stop, drop some cash, and roll over for a sale. We didn’t, so no sale today, buddy, sorry.

By Saturday evening, the pushy sales guys asked me that question for what had to be the 15th time in a week. On tilt from a rough cash game session, I decided it was my turn to be a nuisance, so I took my camera out and snapped a photo of them.

Next to a free swag bag worth $25K at the Oscars, there’s nothing your average syndicated buyout Hollywood A-list TV and film actors like more than to blow off some of their ridiculously bloated bankrolls at the World Series of Poker. Sports stars are no different: there are only so many homes in the Holmby Hills hood of Hollywood that one person can occupy. There are actors who show up pretty much every year, like Everybody Loves Raymond‘s Ray Romano and his series sidekick and avid poker player, Brad Garret. Olympic icon Michael Phelps and film actor Kevin Pollak are also comeback kids when it comes to making time for the WSOP most years.

On Saturday, as I was checking out some of the action, I bumped into (literally) James Woods, actor and unabashedly politically conservative tweeter. The coke-snorting villain in one of my all-time favorite movies, Casino, Woods was gracious enough to pose for a picture after he finished a banana on his way back to the table in Event #8, $2,500 Mixed Triple Draw Lowball.

“Got to get that nutrition,” he said with a smile.

After officially retiring from acting in 2017, Woods has devoted much of his time to poker and now competes in numerous WSOP events each year.

Besides thespians and sports stars, poker royalty like Phil Hellmuth, Daniel Negreanu, and Jason Mercier are often spottable walking down the lengthy Rio corridors: after all, they make millions playing the game, but they ultimately have to get up and use the bathroom and eat, just like the rest of us.

Where to Find the Action

There are three main tournament event and cash play rooms, all massive in size. The Pavilion (below) is mostly used for cash games and daily deep stack tournaments. Most bracelet events take place in the Brazilia or Amazon, which may be a familiar sight to ESPN’s TV fans.

The well-lit featured table — which will host many of the 78 bracelet event final tables in 2018 — is located inside the Amazon room. Limited seating is available, free of charge, for fans to rail the action in person.

For those who like to watch in general, guests are free to roam the tournament rooms, as long as they remain in designated areas (if you don’t, a multitude of security guards are at the ready to stop you). Even if you can’t afford to buy into an event (or simply don’t want to), the World Series of Poker offers a unique and exciting fan experience.

Just dodge the cell phone case salespeople, and you can expect to have a fascinating time to talk about when you return to your non-Vegas life.