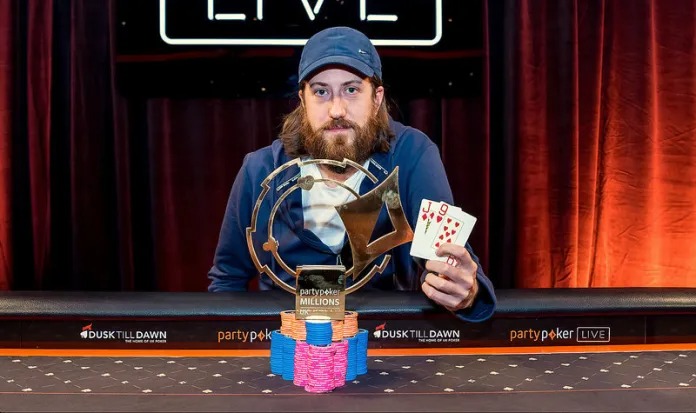 The 2018 partypoker LIVE MILLIONS UK got underway this past weekend at the Dusk Till Dawn Poker Club in Nottingham, United Kingdom. The series will from Sept. 29 – Oct. 7, with £8,500,000 in guaranteed prize pools. A whopping £5,000,000 is guaranteed to be paid out in the main event alone. That £5,300 buy-in got underway on Sunday, Sept. 30 and will continue until a champion is decided on Oct. 7.

This event ran over the course of two days. By the time the field was narrowed to just nine players O’Dwyer was sitting in sixth position. He found an early double up after the money bubble was burst, picking up AHeart SuitKDiamond Suit in the big blind and calling a shove from Niall Farrell in the small blind. Farrell held the QSpade Suit10Spade Suit. The board ran out 7Club Suit3Diamond Suit2Diamond Suit6Club Suit5Spade Suit and O’Dwyer’s ace-high was good enough to win the pot and catapult him into the lead. From there he never looked back, eliminating every remaining opponent en route to the title.

As a result of his rush, O’Dwyer took more than a 7-to-1 chip lead into heads-up play with Fabrizio Gonzalez. On the final hand O’Dwyer moved all-in with the JDiamond Suit9Heart Suit putting Gonzalez to a decision for his last seven or so big blinds. Gonzalez picked up the best possible hand in pocket aces and snap called, only to have the board run out JClub Suit10Spade Suit9Spade SuitJSpade SuitQClub Suit. O’Dwyer secured the pot and the title with his full house, sending Gonzalez to the rail with £286,750 ($372,775 USD) as the runner-up finisher.

Here is a look at the payouts and Card Player Player of the Year points awarded in this event:

While this super high roller is finished, poker fans hoping to catch the exciting action from the main event of the MILLIONS UK will be able to find live streaming coverage exclusively on mypartypokerlive.com. Coverage will include five days worth of broadcasts from the Main Event, starting on Oct. 3 and continuing until the event concludes on Oct. 7 James Dempsey will be the lead commentator, with appearances from the likes of Simon Trumper, Mike Sexton, John Duthie and Ludo Geilich expected.

partypoker Has Big Plans For The Final Months of 2018

The partypoker LIVE MILLIONS UK is the first of several massive series and events that partypoker is behind in the coming months. The World Poker Tour and partypoker LIVE have teamed up for the WPT Montreal Festival, an exciting series that features combined guarantees of $8,165,000 CAD. The centerpiece of the whole series is the $5,000,000 CAD guaranteed, $5,300 CAD buy-in no-limit hold’em main event, which will run from Oct. 28 – November 4.

Next on the agenda is the massive Caribbean Poker Party (CPP), which is set to take place from Nov. 9-18 at the Baha Mar Casino & Hotel in Nassau, Bahamas. There are 13 events set to take place during the festival, but the whole affair is centered around two gigantic tournaments: The $10,000,000 guaranteed $25,500 buy-in MILLIONS World and the $10,000,000 guaranteed $5,300 buy-in Caribbean Poker Party Main Event.

“There are many coveted titles in poker, from the EPT and WPT Grand Final titles, to WSOP and WSOPE Main Event and Players Championship bracelets, and not forgetting our own MILLIONSGrand Final crown,” said partypoker LIVE president John Duthie. “However, a $10,000,000 guaranteed, $25.5K buy-in tournament is just as important as any of those. We can’t wait to hand the trophy over to our first winner in November. Let’s hope it’s one of the 100+ online qualifiers partypoker will be sending, as that would be quite some story.”

Following on the heels of that huge series in the Carribean will be the MILLIONS Online. As previously mentioned, the $20 million guaranteed $5,300 buy-in online event will run from Nov. 25 – Dec. 5 and is expected to be the biggest online tournament ever, with $2.5 million going to the eventual champion.

Information about the all of these upcoming events can be found on mypartypokerlive.com.