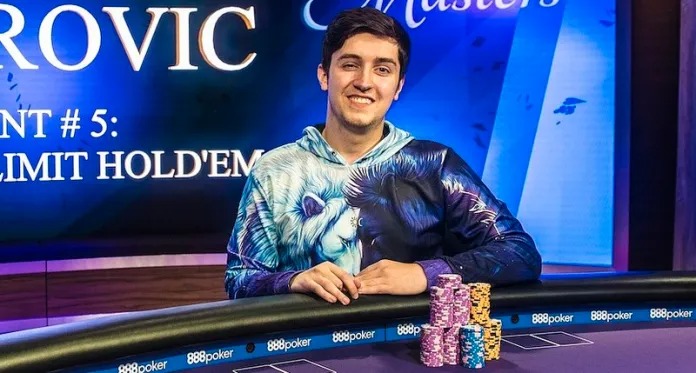 Three years ago Ali Imsirovic made his first recorded live tournament cash. He finished 46th in a $1,500 buy-in event in the Caribbean for $3,650. Since making that first splash, the 23-year old from Vancouver, WA has gone on to cash for more than $2.5 million and now finds himself in the proverbial deep end, playing in some of the largest buy-in events in the world. Imsirovic worked his way into a position to take some chances in bigger tournaments and then was able to convert those opportunities into a break out year on the live circuit. So far in 2018, he has made 11 final tables, won four titles and cashed for $2,170,200. All six of his six-figure cashes have come this year.

Card Player recently caught up with Imsirovic to talk about his incredible run in 2018, how he climbed the live tournament ranks so quickly and much more.

Card Player: There is a blog post you made that said you were playing stakes as low as $0.02-$0.05 cash games not all that long ago, and now you are among the top 30 players in the 2018 Card Player Player of the Year race, with more than $2.1 million in earnings this year alone. Can you talk about how things have changed so quickly for you? It’s not at all common for young American players like yourself to climb the ranks as fast as you did these days.

Ali Imsirovic: It went much faster than even I expected, for sure. At this point in my career, I thought I would be playing in like $5,000 buy-in events, a few $10,000 ones here and there. I did not expect to be at the level that I’m at now. It’s been hard for me to adjust to how things have changed so quickly as well. I think I’ve been very fortunate with a couple of key outcomes early in my career, and I also met the right people who have helped me along in my development. That being said, I don’t want to imply that its all been luck, I have put in a lot of hard work and dedicated a lot of my time to playing poker and studying the game.

CP: So it sounds like it has been a whirlwind experience for you. How was it that you came to be interested in poker in the first place? Many of the generation of young stars that came before you frequently cite the ‘Moneymaker effect’ as the genesis for their poker careers. What was it that got you interested in the game?

AI: When I first got into the game, it was because I had seen the 2010 World Series of Poker main event final table, the one with Michael Mizrachi and Joseph Cheong, the year that Jonathan Duhamel won. I just thought it was fun, this Asian kid bluffing everybody, Mizrachi doing the craziest things… I just thought it was great. So for me, it wasn’t the Moneymaker effect, it was the Cheong-Mizrachi effect. Before that I spent all of my time playing basketball. I started to have a bunch of ankle problems, though, and I was looking for something else to feed my competitive drive. Around that time my dad was playing poker with his friends all the time, just for fun. He did not want me to play, so of course, when your parents tell you not to do something, it just increases your desire to do it. I started reading a bunch of books on the game when I was 17, and just went from there.

CP: Early on, what were you playing when you first started? When did you decide that you might be good at the game?

AI: So, just after turning 18 my dad gave me $60 for me to fix my guitar. I went to play in a $60 buy-in tournament instead, and ended up taking it down for like $1,500. It was a fortunate start. From there, I put $100 online and played very low stakes for a really long time. I didn’t get out of playing $0.02-$0.05 for quite a while. I still wasn’t very good yet, but I just loved to play and was playing all the time. Just around two years ago I started to figure a few things out and began to dedicate myself more to trying to get better at the game, and from there I was able to ascend through the ranks much faster.

CP: In your tournament career did you ever find that you got ahead of yourself, in terms of letting your success in a single event make you feel that you were ready to take on more than you really were prepared to?

AI: Definitely, I fell into that mistake very early on. If anything, I’m actually glad it happened when I was playing lower stakes. I had won a tournament online for $30,000 and was like, ‘Oh, I’m the best!’ I started playing $2-$4 and $3-$6 no-limit online, and before winning the tournament I was playing $0.50-$1.00. So I definitely wasn’t ready for the move up in stakes. I lost a bunch of buy-ins and realized that winning a single tournament didn’t mean anything. It lead me to study a lot more, though. Since then I’ve made friends with a lot of the higher stakes guys and I’m always trying to ask them questions. I’m just trying to be aware of the players that are better than me and try to focus on what I have to do to get to their level.

CP: Along those lines, when you won the Poker Masters Purple Jacket you said, “There are still plenty of guys I think are much better than I am, so I got a lot of work to do. I just ran better than they did but I’m looking forward to the challenge.” What specifically do you mean when you say that you’re going to keep working? Is that just continuing to play and study the game, and how are you studying?

AI: In the modern poker climate, study is more solver based. (Author’s note: A ‘solver’ is a poker program that examines specific poker hand situations and recommends what it determines to be the game-theoretically optimal, or GTO, approach to how to play the hand.) It is a mathematical thing, sitting down and putting in the time to run simulations and figure out exactly why solver does this, and how you can deviate from what it recommends. Studying poker is a lot more dry now, but I still really enjoy doing it.

CP: Using solvers to work on your game is common knowledge at high stakes, but the average poker fan might not have even heard of these kinds of programs. Do you have any advice for people who might be interested in learning more?

AI: There are a lot of tutorials on YouTube. On how to use the solvers, and I think that is the easiest way to get started. There are also plenty of online training sites were the instructors are using solvers, so if you’d rather not run your own simulations but would prefer to just learn from good players, there are a bunch of videos were they’re going over simulations that they’ve run and learned from.

CP: So you said yourself that you were surprised by how quickly you rose through the ranks. Compared with ten years ago where the pinnacle of the poker world was largely $10,000 main events, today the biggest tournaments have drastically higher buy-ins while main event buy-ins are smaller on average. What are your thoughts on deciding to make the jump from the main event level to the high roller scene?

AI: It is actually really hard for Americans these days, because they aren’t playing the biggest stuff online. In that situation, it is hard to go from playing $3,500 main event to playing $25,000 buy-ins without some really big scores. For me personally, I’ve always had the goal of trying to be the best. Once I got to a very comfortable spot financially, I knew that I would take some shots as long as I could sell some action. I’ve been fortunate to meet people who were willing to buy my action. I want to play against very good players so I can continue testing myself, so for me it was no question that I was going to play Poker Masters and continue trying to play $25,000 and $50,000 buy-ins even after that. At the start of the year I didn’t expect to be playing a lot of these, but as the year progressed I just kept doing better and better and I got connected to the right people, so as time went on it become more clear that I could play more of these.

CP: So winning the Poker Masters was essentially winning player of the series, up against many of the best players in the game. Did it make it more special for you that it wasn’t just taking down a single event, the purple jacket represented success across a whole series?

AI: Yeah. So during the final event of the Poker Masters, the $100,000 buy-in, I was knocked out and Brandon Adams was still in had a shot of beating me for the jacket. I was really sweating it, and a few of my friends and I went to a bar and were anti-sweating him pretty hard. When we found out that he busted and I had locked up the purple jacket, I started crying. I was just so happy. It meant a lot to me because winning a bracelet or something, while I obviously want to win one of those, it likely wouldn’t mean quite as much to me as this did. Those events, a lot of them you are up against soft fields. The purple jacket was against some of the best players in the world, and I put together the best overall series and won two titles. It almost felt like it solidified me as belonging in these high roller tournaments. It felt like a milestone for me, just a really big achievement, to the point were I just broke down in tears for a little bit.

CP: What are your goals in tournament poker moving forward? Do you have any benchmarks that you are trying to hit from here on out?

AI: Right now my focus is just on these high roller tournaments. My goals are basically just trying to win as many of these things as possible. I’m playing some big tournaments coming up: I have a seat reserved for the $250,00 buy-in event at the partypoker Caribbean Poker Party and I’m going to try to play the $300,000 Super High Roller Bowl next month at Aria. The goal is to just keep testing myself in the highest stakes and toughest tournaments in the world, and try to improve until I feel that I’m one of the better players in the field.