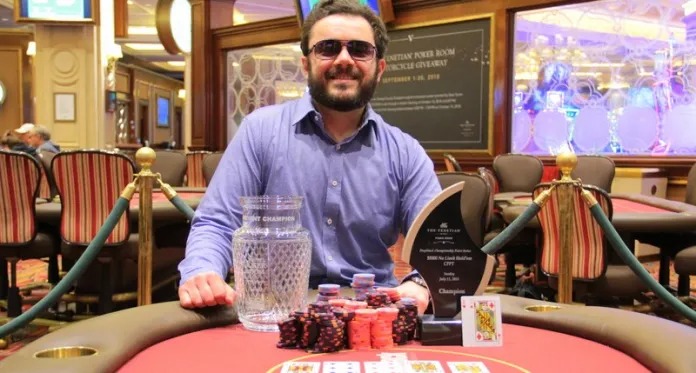 Anthony Zinno, one of the notable members of global poker’s elite and one of the few three-time WPT Main Event winners, topped the field of another prestigious tournament after a nice run at the WSOP.

Zinno took part in another popular summer series annually taking place in Las Vegas and bested the field of the festival’s Main Event just a couple of days ago. The popular poker pro emerged victorious in The Venetian DeepStack Championship Poker Series CPPT $5,000 Main Event after surviving through five days of action and outlasting a field of 547 entries.

The tournament kicked off on Saturday, July 14, at The Venetian, one of the premium poker destinations across the Strip. The Main Event featured a guaranteed prize pool of $2 million. The guarantee was crashed due to the great interest in the tournament. An overall prize pool of $2,529,875 was thus created to be distributed to the top 63 finishers.

Aside from the champion’s trophy and all the accolades that a winner deserves, Zinno also collected the amount of $466,670. Including his latest live tournament cash, the poker pro now boasts a bankroll of over $8 million.

Zinno said after his latest poker triumph that he could finally take a break from poker as he has been playing almost incessantly over the past several months. Zinno jumped into The Venetian Main Event action fresh from a nice run at the WSOP. The player finished in-the-money in 12 tournaments on the schedule of the world’s longest running poker series and made two final table appearances.

While the player failed to capture a WSOP gold bracelet this summer, he already knows very well what it feels like to claim the most coveted non-monetary prize in poker. He won his piece back in 2015 when he outlasted the elite field of the $25,000 Pot-Limit Omaha High Roller. That victory actually secured the popular poker pro with his largest-ever live cash of $1,122,196.

Zinno is one of just five players in the history of the World Poker Tour to have won three Main Event titles from the series’ Main Tour. He claimed his first title in 2013. It was followed by two more titles in 2015 to tie with Carlos Mortensen and Gus Hansen who were the only other three-time WPT title holders at the time.