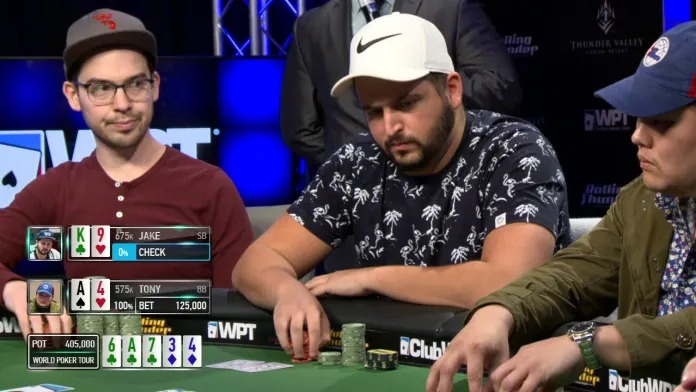 Tony Tran emerged victorious from a field of 250 entries to win the 2020 World Poker Tour Rolling Thunder $5,000 buy-in no-limit hold’em main event, earning his second WPT title and the top prize of $279,270. Incredibly, Tran’s heads-up opponent in this tournament was none other than Jake Schwartz, who also finished runner-up to Tran in his previous title run at the 2018 WPT bestbet Bounty Scramble.

“I feel really good that I’m actually a champion again. It just shows that the first one was not a fluke,” Tran told WPT reporters after securing the win. “I don’t think it compares to the first one, but the second one is definitely good because I think there are only a few that actually have [at least two] WPT titles.”

In fact, the 32-year-old real estate investor from Philadelphia became just the 25th player in WPT history to secure two or more victorious on the tour. In addition to the title and the money, Tran was also awarded 816 Card Player Player of the Year points as the champion of this event. This was only his second final-table finish of the year, but it was enough to see him climb into 56th place in the 2020 POY race, which is sponsored by Global Poker.

The final day of this event began with just six players returning to the Thunder Valley Casino Resort near Sacramento, California. Tran came into the day essentially tied for the shortest stack. He managed to rebuild his stack early on by knocking out two-time World Series of Poker bracelet winner Shankar Pillai in sixth place. Tran picked up pocket kings and held against Pillai’s pocket sevens to send him to the rail with $45,390.

A few orbits later Tran found a huge double up with QHeart SuitQDiamond Suit beating out the JDiamond SuitJClub Suit of two-tim WPT winner and defending champion of this event Erkut Yilmaz.

Yilmaz lost a preflop race against Jake Schwartz to fall to the shortest stack at the table. He was eliminated shortly after, cashing for $61,685 as the fifth-place finisher.

Kevin Rabichow entered the final day as the chip leader, but lost some all-ins during short-handed play that left him near the bottom of the chip counts. He shoved his last 16 big blinds from the button with KClub Suit4Club Suit and was called by Tran in the big blind with AClub SuitJClub Suit. Tran made a full house by the river to knock Rabichow out in fourth place ($85,800).

Robert Heidorn was the next to fall. He got all-in preflop from the button with 2Heart Suit2Diamond Suit and Tran called holding 10Spade Suit10Diamond Suit. Neither player improved and Tran’s tens took it down. Heidorn earned $122,105 for his third-place showing. It was the third-largest score of his career, with his biggest being the $800,000 he took home as the 10th-place finisher in the 2019 WSOP main event.

With that Tran and Schwartz set up a rematch of their heads-up showdown back in October of 2018. Tran began with just more than a 4:1 chip advantage over Schwartz. The two battled it out for 28 total hands, with Schwartz mounting a comeback midway through that saw him close the gap somewhat. By the time the final cards were dealt, though, Tran had regained the lead and ground Schwartz down to less than 14 big blinds. With blinds of 50,000-100,000 with a 100,000 big blind ante, Tran raised to 250,000 from the button with QClub Suit10Spade Suit. Schwartz shoved all in for 1,350,000 with JHeart Suit10Heart Suit. Tran made the call and was in good shape heading into the flop.

The JDiamond Suit9Diamond Suit8Club Suit gave Tran the nut straight right off the bat. The 5Diamond Suit on the turn left Schwartz drawing to a chop on the river, but the 7Spade Suit locked up both the pot and the title for Tran. Schwartz earned $177,680 as the runner-up finisher this time around.