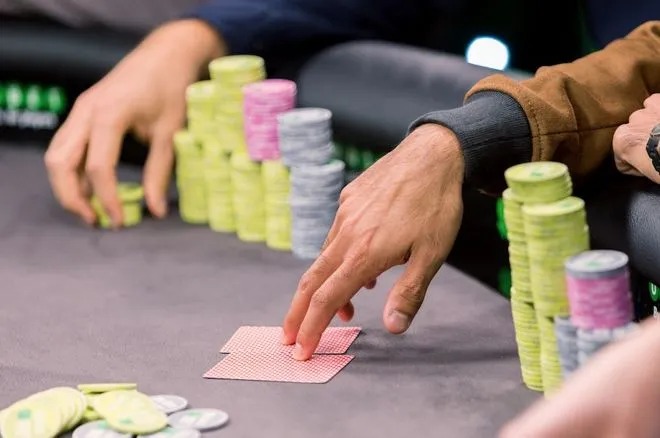 During Season 1 of High Stakes Poker, Doyle Brunson ran a failed bluff against his friend,Ted Forrest. After he was caught, Brunson was heard mumbling to himself “I know better than to bluff an idiot.”

Brunson obviously does not believe that Forrest is bad at poker — rather, he was just humorously lamenting his bluff getting called. In spite of this, many people took his words completely out of context. They use them as a mantra to remind themselves not to try and bluff players in small stakes games which they view as a sea of idiocy teeming with schools of fish incapable of folding.

The truth of the matter is, if you’re not bluffing, then you’re not playing poker. You’re playing with one hand tied behind your back. This was a huge mistake I made when I began playing live cash games. Once I realized this, my results began to improve dramatically.

In my first live cash game, I quickly noticed players limp-called with much weaker hands than they do online. Then if they made a pair or had a draw, they’d call down to the river. They just wanted to see if the hand they made was better than the hand I was betting. Usually, it wasn’t. This allowed me to print money by just betting big hands. I thought to myself, “if they’re going to call my value hands, why should I ever bluff?”

There were two big problems with this sticking with this strategy. For one, I didn’t make big hands often enough. As soon as one of them got cracked, I gave back the bit of money I’d made. The bigger problem, though, was in the stereotyping of players as “idiots.” They were not idiots. They just found joy in making big hands and winning. Eventually, they realized that I was a nit and that the hands they made were not big enough to beat me.

Occasionally, I’d find that one guy who would announce “Oh, Carlos is betting? I know you’ve got the nuts… sigh, I call… nice hand.” I loved that guy, but he’s one in a million nowadays. Most of my opponents soon realized that when I bet, I had it. If they could crack my big hands, they’d call. If not, they’d fold. I, the learned poker scholar who’d mastered tight-aggression and never bluffed the river, had become the “idiot.”

In reality, we know that they do fold sometimes. So now, we can improve on that strategy by finding the times when they fold and then bluffing. Even I knew this back when I “never” bluffed. That’s why I would continuation bet on ace-high flops when I didn’t have an ace. The play had become so automatic in my game that I’d completely forgotten that continuation betting without a pair is, in fact, a bluff.

The problem I ran into is that there are some players in small stakes games who will call that bluff without an ace. Most times, I did not double-barrel the turn. The times I did, I rarely triple-barreled because I thought they’d never fold the river. Now I know I was just fooling myself. This is only a legitimate concern in games where people consistently play with small stacks.

Bluffing requires the ability to put significant pressure on your opponent. In order to do this, you have to make sure you have enough chips in the effective starting stacks to size bets big enough to get the job done. In my game, the stacks were deep. My problem was not that I shouldn’t bluff — it was that I didn’t continue my bluffs often enough against players who called the flop bet with weak ranges.

A lot of well-intentioned aggressive players make their first mistake when they try to bluff small stakes players with bad hands preflop. Very rarely do these players fold before the flop. The whole reason they are playing is to see if they can make a hand. In their minds, if they are going to fold to your preflop raises, then they may as well stay home.

A bad preflop bluffing hand is one that has very little potential to become the best hand postflop. This usually means hands that are unpaired, unsuited, unconnected, and not very big. Raising hands like these in small stakes games, then not being willing to bluff on multiple streets when called, is a recipe for disaster. If you aren’t an expert on postflop bluffing, you have to tighten up your preflop range.

Once you do get a hand with which you can raise preflop, you’re going to be stronger on average going into the flop than the players who limp-call before the flop. This means that you are more likely to have the best hand. More importantly, you are likely to have a robust drawing hand that you can use as a semi-bluff when you are behind. Let’s look at an example of a hand where I decide to bluff my loose friend postflop.

My friend, let’s call him Sticky, limps in from middle position. I raise from the button and get called by the big blind and Sticky. The flop comes {A-Diamonds}{9-Spades}{5-Hearts}. This is a good flop for my range which has a lot of {A-}{x-} hands. It checks to me and I make a continuation bet, the big blind folds, and Sticky calls. Great.

Sticky is the guy about whom I used to have nightmares. He is the inspiration for the “I should move up to where they respect my raises” fallacy. When he calls my c-bet, he could have a set, two pair, an {A-}, a {9-}, a {5-}, any small-to-medium pocket pair, or any of the available gutshots.

If he has any pair, he’s happy because he’s made a hand. This was his purpose in calling preflop. He’s not just going to fold it to a single continuation bet. Once I fire the flop, I know I’m going to have to fire the turn the vast majority of the time to convince him to fold his weakest pairs.

I’d remember that one time I barreled the turn and got my self-righteous suited-Broadway cards beaten by some guy with a trashy bottom pair when the river went check-check. I’d say to myself “This time, I’m not going to throw good money after bad.” I’d silently chant Brunson’s sage advice to myself and decide to check it down. Sometimes, if you were sitting close enough, you could sniff a whiff of defeatism in the sigh I’d undoubtedly exhale.

But that was yesterday. Today, I barrel the turn. I now know that this bet adds credibility to the story that I have a big ace. In spite of my selective memory, many of my opponents will fold to a sizable turn barrel (that is, if the turn doesn’t improve their hand). Unfortunately for me, ol’ Sticky McCallingston could have anything, so I don’t know if this card improves his hand or not.

He calls the turn bet. This could mean he has the ace, but because he is Sticky, he could also have any other pair or draw. I used to take the pessimistic view that he’s calling with every possible pair and I could not beat any of them. Now, I instead notice the good news, which is that he did not raise. This allows me to remove the strongest hands from his range, like a good two-pair hand or better, because he would have likely raised the turn with these.

The bad news is that this turn card improves his range significantly. A lot of his pairs picked up draws and a lot of his draws picked up pairs. But even this has a bright side — I now have a good idea of which river cards are good for me and which are bad for me.

Finally, we get to the… river. Just the sound of the word used to conjure up bad feelings for me. Previously, by this point I would have already mentally checked out of the hand. This was a huge mistake because the river is the spot in the hand where you have the most information and where people play the worst. Now instead of being fearful, I’ve come to realize that this is where I can have my biggest edges and win my biggest pots.

I know that Sticky is not likely to have a strong hand given that he did not raise the turn. If he were drawing to a strong hand, I know which cards he’s looking for. The board is {A-Diamonds}{9-Spades}{5-Hearts}{8-Clubs}, so the cards right around the middle of the pack will help his pair-plus-a-draw hands. They could give him a straight or two pair. Chances are, he’ll let me know if they do by betting.

I will not reveal the river card, but I will say that he checks to me again. In the past, I’d check back and prepare to muck. Now I see his check as a green light to make my move. I am not expecting to make him fold the times he has an ace or better. I just want to get him off of his weakest pairs that did not improve to two pair or a straight. For this, I can size my bluff smaller. This has the added benefits of needing to work less often and possibly being successful more often because it looks like a thin value bet.

Even for ol’ Sticky it’s going to be very difficult to make this call with a hand like {5-}{x-} or {8-}{x-}, especially if the river is another overcard and all the draws miss.

But What If They Call?

If you bluff and get called, don’t worry. It’s not supposed to work every time. Don’t be ashamed to show your hand. This may lead your opponents to call you down more lightly in the future.

Meanwhile when they show the winner, pay particular attention to the hand that called you. If he shows you top pair or better, don’t worry because you weren’t trying to make him fold that hand, anyway. If he shows you bottom pair, then you really are dealing with a maniac and you can go back to never bluffing, but only against him specifically.

If the people in your small stakes game do not give up easily with their wide ranges early in the hand, then you should find out where they do give up and bluff them there instead of not bluffing them at all. In order to do this, you’re going to have to play hands that allow you to get to these spots with decent equity for you to use as a Plan B in case they do hero-call you.

Those who live and die by Brunson’s often misunderstood words either face players they don’t have enough history with to exploit their nittiness, or they are fortunate enough to have truly found the last game of regular idiots in existence. Luckily for them, they can continue to play No-Bluff-It Stack’em.

But the rest of us had better learn to box with both hands if we want to play No-Limit Hold’em. Source: pokernews.com/strategy/…