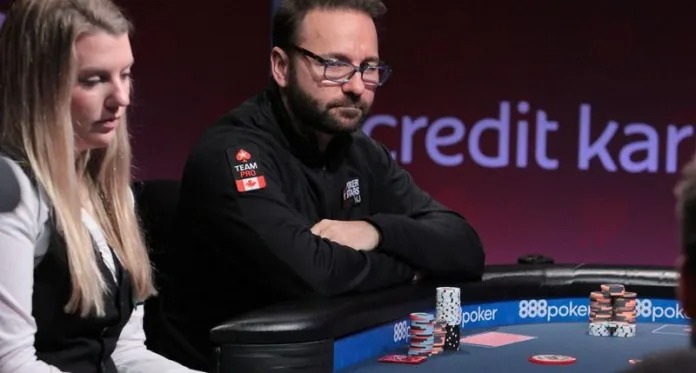 On Sunday, the World Series of Poker kicked off its prestigious $1 million buy-in tournament, dubbed “One Drop” after the charity it benefits. Registration to the event closed early Monday afternoon with 27 entries creating a roughly $25 million prize pool.

A whopping $10 million was set to go to the winner at the final table on Tuesday. The top five will all earn at least $2 million, according to the WSOP. While the prize pool is massive, the turnout was actually down compared to 2014 (42 entries) and 2012 (48 entries).

Among the competitors on Monday was Poker Hall of Famer Daniel Negreanu, who finished second in the event in 2014 for $8.2 million. Negreanu sits with just under $40 million in lifetime tournament earnings, which is good for the no. 1 spot all-time. Erik Seidel, who also entered the $1 million buy-in on Sunday, is no. 2 with about $35 million in lifetime live tournament winnings.

Both Negreanu and Seidel were sitting with healthy stacks early on Day 2. Despite having many bracelets and other major tournament titles on his poker resume, Negreanu is pretty amazed that he’s at a place in his poker career where passing the $40-million mark is within reach. He could get to nearly $50 million with a win this week in One Drop.

“When I first started playing tournaments we were playing $100, $300 [buy-ins],” Negreanu told Card Player during a break in play. “There was like one $10,000 [buy-in]. There weren’t any tournaments bigger than that. Forty million is insane to think about.”

The proliferation of the “super high rollers,” at the WSOP and beyond, has made such massive sums possible. Negreanu thinks it’s possible that someone hits $100 million in earnings one day, especially if the super high roller scene continues to grow.

“Depending on how crazy the high roller circuit gets, if you have $1 million buy-ins now, what if there’s a $10 million buy-in? A guy could get to $100 million in one tournament,” he said.

At the 2012 One Drop tournament, the first time the event ran, Cirque Du Soleil’s Guy Laliberté joked about making it a $10 million buy-in in the future.

Stay tuned to CardPlayer.com for a recap of this year’s $1 million buy-in.