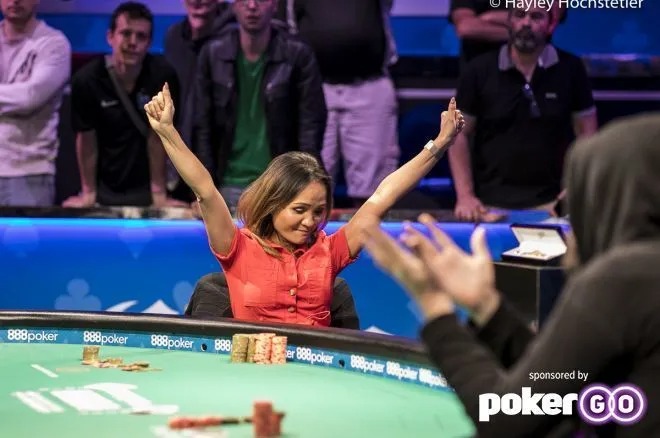 While most of the attention at the Rio was centered around the World Series of Poker main event, Stephanie Dao was in the back corner of the Amazon room quietly winning her first career WSOPbracelet.

Dao bested a field of 193 entries in the $3,000 limit hold’em six-max. She defeated Alain Alinatheads-up to earn the title and the $132,189 first-place prize. It’s Dao’s second final table after a fourth-place finish in the ladies’ event netter her $52,007.

Dao, who resides in Canada, plays limit hold’em regularly at cardrooms in Ontario. Tournaments, however, are a new experience for her.

“For about five years, I didn’t play any tournaments at all,” Dao told WSOP reporters after her win. “I was giving up on it. Then I had a deep run at [an event in Canada]. It gave me the motivation to play more tournaments. I’m very happy with the outcome this year.”

Dao came into the final table as the chip leader and extended it early on. About two hours into the day, Oleg Chebotarev was eliminated in sixth by Alinat. Early in five-handed play, Dao had about half of the chips in play.

By the end of that same level, however, Ian O’Hara had taken over the chip lead. O’Hara knocked out Jan Suchanek in fifth and Alinat sent Chad Eveslage home in fourth.

Alinat, O’Hara and Dao all took turns with the chip lead during three-handed play. Dao got the best of O’Hara and eliminated the Florida pro in third, giving her a nearly 2:1 chip lead against Alinat. The Frenchman briefly overtook her for the lead, but ultimately fell when his K-Q couldn’t hold up against Dao’s K-9.