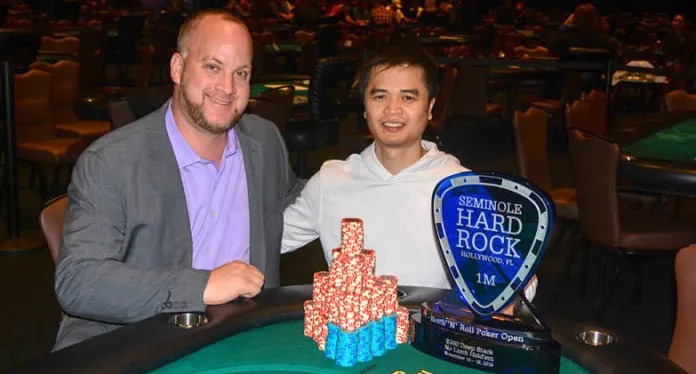 Trung Pham is having quite the run this November. Just two weeks after winning an event at the World Series of Poker Circuit Choctaw series for his second gold ring the Texas native took down the kickoff event of the 2018 Seminole Hard Rock Rock ‘N’ Roll Poker Open. The event was a $360 buy-in no-limit hold’em tournament with a massive $1 million guarantee. A total of 4,558 entries were made across the eight starting flights to easily surpass the guarantee, creating a final prize pool of $1,376,400. Pham came out on top, earning $123,364 and the title after striking a deal with seven players remaining.

“I ran really great in the tournament,” Pham told Seminole Hard Rock blog reporters. “I won with jacks against kings (flopped a set), and had a big run.”

Pham came into the final day of this event in fourth chip position with 16 players remaining. He survived to the unofficial final table of 10 in ninth position, sitting with just 16 big blinds when the field first combined onto one table. He got involved in several big pots early on, with his stack swinging wildly as he alternated between winning and losing preflop all-ins.

Pham surged into the lead when he picked up the JSpade SuitJClub Suit, which held up against the ADiamond Suit4Spade Suit of David Maslowski. Pham was covered by just a couple big blinds, which meant the Maslowski was left quite short after the hand. He was eliminated shortly after in ninth place ($15,725).

James Lloyd was knocked out in eighth place ($25,927) when his ASpade SuitKClub Suit fell to the KHeart SuitQClub Suit of Pavlos Kasselouris, who made a straight on the turn after the chips went in preflop.

The final seven battled it out for a while, but eventually, the clock was paused in order to discuss making a deal. In the end a chop was made based on ICM that saw Pham awarded the title and the largest payout of $123,364 as the chip leader at the time. Pham also earned 528 Card Player Player of the Year points for the win. He currently sits in 180th place in the overall POY standings.