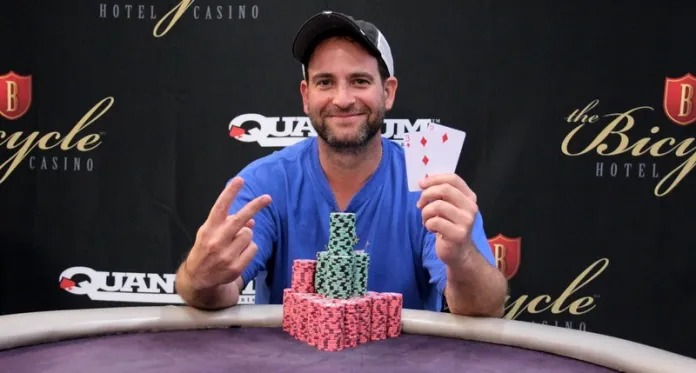 George Antonakos has won the 2018 Card Player Poker Tou Bicycle Hotel & Casino main event, outlasting a massive field of 2,180 total entries to earn $75,365 after striking a deal when the final seven were reached. This was the 42-year-old amateur from Marina Del Rey’s second largest score, behind his second-place finish in an event at the Borgata in 2010 for $110,434. He was in for one $245 buy-in in this event.

“It’s a great ROI man! It’s fantastic,” said Antonakos. “If somebody told me three days ago I’d be chopping it for $75,000 Antonakos I’d be ecstatic. It’s unbelievable.”

The final day of the event began with 34 players remaining and Warwick Mirzikinian in the lead. He ultimately succumbed in 19th place, earning $4,545. Late on the final day Antonakos took control. He won gigantic pots to leave Amir Ghazvinian on fumes and eliminate Thi Truong. In the later hand he made the nut flush against Truonh’s top two pair to send her to the rail and take the chip lead.

After playing seven handed for a while, the remaining players decided to consider making a deal. Eventually, final terms were agreed upon, with clear chip leader George Antonakos securing the largest payout and the title.

Here is a look at the payouts from the final table: