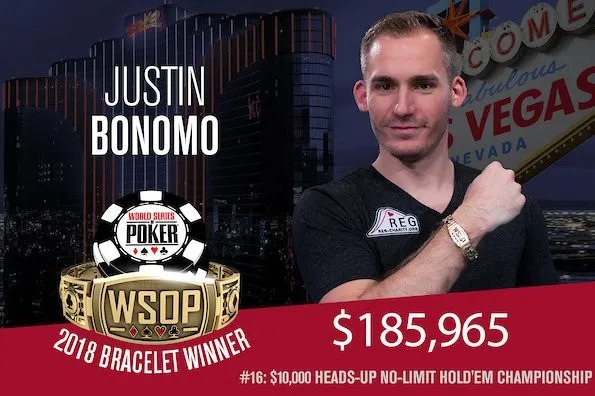 Card Player’s 2018 WSOP coverage is sponsored by BetOnline Poker. Get a 100% bonus, up to $1,000, by joining now. The site offers great cash game action and a chance to win more than $1 million in guaranteed tournaments throughout the month.

Justin Bonomo is in the middle of one of the greatest streaks in the history of tournament poker, rivaling the 2014 performance of Daniel Colman or the incredible 2016 put together by Fedor Holz. The 32-year-old poker pro won his ninth title of the year today, emerging victorious in the 2018 World Series of Poker $10,000 heads-up no-limit hold’em championship. Bonomo defeated a field of 114 entries to win his second career gold bracelet.

“The first bracelet definitely felt a lot more special,” Bonomo told WSOP reporters after taking home his second. “I had four second-place finishes at that time without a first-place finish. Now, I don’t really have to feel like I have to get any monkey off my back anymore or kill any kind of curse. The significance of this one just means my insane winning streak isn’t over. I just hope it continues.”

In addition to the hardware and the money he earned in this event, Bonomo was also awarded 600 Card Player Player of the Year points. As previously mentioned, he has won nine titles this year and six since the start of May alone, including taking down the $300,000 buy-in Super High Roller Bowl for $5,000,000 just 10 days before winning this event. He followed that up by winning two $25,000 buy-in high rollers at Aria before he made his way to the Rio for the series. He also secured the title in the Super High Roller Bowl China event for approximately $4.8 million back in April. The upshot of all of Bonomo’s many victories and final table appearances is that he has taken the outright lead in the Player of the Year rankings, which are presented in 2018 by Global Poker.Bonomo has earned an average of 39.5 POY points per day so far this year. If he somehow manages to maintain throughout the rest of 2018, he will more than double the 7,220 points earned by 2017 Player of the Year award winner Adrian Mateos.

Bonomo won seven consecutive heads-up matches to secure the title in this event. He defeated David Peters, David Laka, Jake Schindler, Niall Farrell, Mark McGovern and Martijn Gerrits on the way to the championship match against Britain’s Jason McConnon. The Manchester native got off to a fine start in the first few hands, but Bonomo took the lead on the sixth hand of the match and never relinquished it.

By the time the final hand arose Bonomo had built a 7-to-1 chip advantage. With blinds of 30,000-60,000, McConnon raised to 150,000 from the button. Bonomo three-bet all-in holding the 4Heart Suit4Diamond Suit. McConnon called all in for 781,000 with the QSpade Suit9Diamond Suit. The board ran out KHeart Suit10Heart Suit2Spade Suit2Heart Suit8Club Suit to keep Bonomo’s pocket pair in the lead. With that McConnon was knocked out in the finals, earning $114,933 for the impressive run that saw him beat Peter Neff, Adrien Allain, Faraz Jaka, Galen Hall, Kahle Burns and Juan Pardo Dominguez consecutively en route to the final showdown with Bonomo.