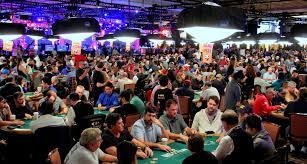 The first of three starting flights in the 2018 World Series of Poker $10,000 buy-in main event is officially in the books. A total of 925 players showed up for day 1A, which is more than a 16 percent increase from the 795 in last year’s first flight.

One reason for the increase may be the earlier starting date. Last year’s WSOP main event began on July 8, while this year’s main event kicks off with 13 other bracelet events still to go on the schedule.

2017 main event champion Scott Blumstein got his title defense effort started early and he was even seated at the ESPN featured table, but his run ended in level 3 when he ran an overpair into the back-door flush of three-time bracelet winner Brian Yoon. Other former main event winners who couldn’t survive the day included Jerry Yang and Qui Nguyen.

Comedians Ray Romano and Kevin Pollak both sat down in the main event, and both managed to advance to day 2, bagging up stacks of 61,100 and 71,300, respectively. Hollywood producer Randall Emmett, who went so far as to hire a marching band to accompany him to the Amazon room at the Rio, finished with 133,400.