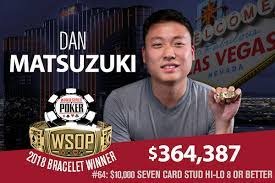 Scottsdale, Arizona’s Dan Matsuzuki had no plans to enter the $10,000 stud eight-or-better event. In fact, he didn’t even play the first day of the tournament. It wasn’t until a friend convinced him to jump into day 2 that he put up the buy-in, joining a total field of 141 entrants.

“Come on, just gamble. Those were his exact words,” said Matsuzuki.

Matsuzuki, who had just five previous cashes at the summer series, came out on top to earn his first braclet, and the $364,387 first-place prize.

“The tournaments don’t really appeal to me too much,” Matsuzuki told WSOP reporters. “This may change my mind, I guess.”

Two-time bracelet winner Christopher Vitch banked $108,739 for his second fourth-place finish of the summer. Vitch was actually the defending champion of this event, winning it last year for $320,103.