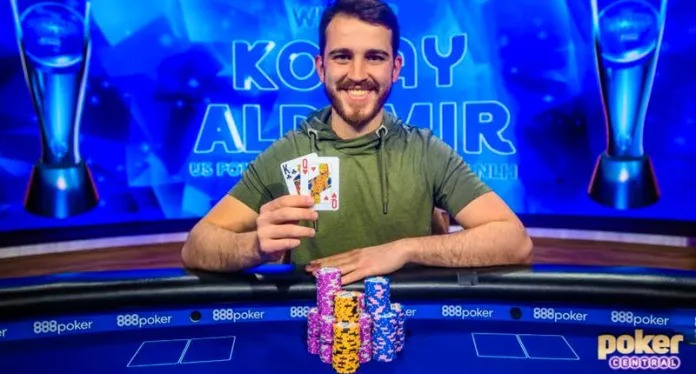 The 2019 U.S. Poker Open $50,000 no-limit hold’em super high roller event attracted a field of 41 total entries, creating a prize pool of $2,050,000. After two days of nosebleed tournament action, German poker pro Koray Aldemir emerged victorious with the title and the top prize of $738,000. This was the third largest score of his tournament career, and it brought his lifetime live tournament earnings to $11,256,055.

“This feels great, honestly. I had a lot of second and third finishes in the last year and winning one feels great,” said Aldemir after coming out on top. “Playing these high rollers is the best thing in poker for me. I have a lot of fun playing these things. Sometimes I take a break from poker, but when I do play I just love competing with the best.”

Aldemir has indeed notched nine second and third-place finishes since the start of 2018, including finishing as the runner-up to Lauren Roberts in the third event of this series. This is his second title in that time span, having also won a $25,000 event at the WPT Tournament of Champions Festival.

Aldemir came into the final table of this event tied for second chip position with 2013 World Series of Poker main event champion Ryan Riess, with Sean Winter being the outright leader among the remaining six players.

The first elimination of the final table came when Seth Davies got all-in with ADiamond SuitQDiamond Suit and found himself called by the AClub SuitQClub Suit of Alex Foxen. The two hands will end up chopping the pot just over 85 percent of the time, but in this instance, Foxen hit three clubs to make a flush and send Davies to the rail in sixth place ($123,000).

Foxen scored his second knockout by winning a preflop race with A-K outrunning the pocket eights of David Peters. The 2016 Card Player Player of the Year award winner took home $164,000.

Four-handed play continued for more than two hours. Despite busting the first two players at the final table, it was Alex Foxen who was the next to fall. He moved all-in for 11 big blinds from the button with AClub Suit8Club Suit and Ryan Riess called with the AHeart Suit9Heart Suit. Both players paired their ace, but Riess’ nine kicker ended up playing, securing him the pot and eliminating Foxen in fourth place ($205,000).

Riess and Aldemir were pretty close in the chip counts, with Sean Winter sitting on the shortest stack. He ended up getting all-in with the JSpade Suit9Spade Suit against Riess’ ADiamond SuitKClub Suit. Neither player improved and Winter was knocked out in third place ($328,000). This was his fifth final table of the 2019 USPO, with one title won along the way. As a result of his incredible consistency throughout the series, Winter has taken over the lead in the USPO points race.

Aldemir took 3.6 million chips into heads-up play against Riess, who began with 2.6 million. He has able to stretch that advantage even further by the time the final hand arose. Riess moved all-in for around ten big blinds with the KHeart Suit7Spade Suit from the button. Aldemir quickly called with KClub SuitQHeart Suit out of the big blind. The board ran out 10Spade Suit10Diamond Suit6Heart SuitJHeart SuitQSpade Suit and Riess was sent to the rail as the runner up, taking home $492,000 for his impressive showing.

Below are the top twelve in the USPO Championship Standings after nine of ten events: