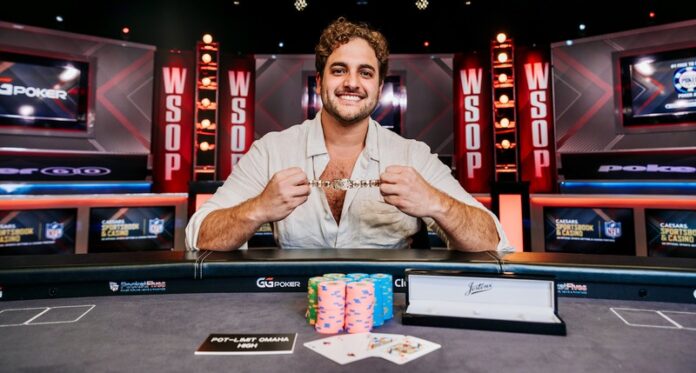 Joao Simao raced to his second World Series of Poker gold bracelet victory, beating out a field of 788 entries in the fast-paced 2022 WSOP $5,000 buy-in pot-limit Omaha and no-limit hold’em mixed event. The 33-year-old Brazilian poker pro secured the largest score of his tournament career for the win: $686,242. As a result, he now has more than $5 million in cashes to his name.

This marked the 16th time a Brazilian player has won a bracelet event. Simao and Yuri Dzivielevski are the only two players from the country with multiple bracelets.

“Every time a Brazilian wins a bracelet, it makes our community grow, more and more, which is good for us and good for the poker world in general,” said Simao after this latest win.

In addition to the title and the money, Simao also earned 1,824 Card Player Player of the Year points after coming out on top. This was his third POY-qualified score of the year, having finished as the runner-up in a $3,500 buy-in event at the Wynn Millions festival in March and fourth in the $1,500 ‘Monster Stack’ event earlier this series. With $1,361,632 in year-to-date POY earnings and 3,624 total points, Simao now sits in seventh place in the 2022 POY race standings, which are presented by Global Poker.

A number of notables were still in contention by the time the official final table of eight was set following Joni Jouhkimainen’s elimination in ninth place ($54,313), including bracelet winner Fred Goldberg, high-stakes tournament rising star Marius Gierse and 2013 WSOP main event champion Ryan Riess. Simao held the lead when the final table got underway and extended his advantage by knocking out Cody Rich in eighth place ($69,727).

Goldberg was the next to fall, with his pocket kings and a suit running into the double-suited pocket aces of Gierse in a round of PLO. Gierse made trip tens on the river to win the pot and narrow the field of six, while Goldberg settled for $90,864 as the seventh-place finisher.

Gierse scored another bustout when his pocket sevens won a race against the K-Q suited of Joshua McSwiney. The flop saw Gierse hit a set, while McSwiney picked up a flush draw. The turn and river were blanks, though, and McSwiney was sent home in sixth place ($120,165).

Simao’s stack took a small hit when he doubled up a short stack, but he soon made up for that lost ground by eliminating Aden Salazar in fifth place ($161,239). Salazar’s 10-9 suited outflopped Simao’s J-10 suited, but a jack on the river sent the pot towards Simao. The Brazilian then won a preflop race with pocket sevens besting the A-10 of Dante Goya to take a sizable lead into three-handed play.

Heads-up play began with Simao holding more than a 3.5:1 chip lead over Gierse. He was able to add to that in the early going, and was still well ahead despite the German earning one double up with two pair.

Gierse was soon all-in and at risk again. This time around the chips went in after the flop of 8Spade Suit5Spade Suit5Club Suit. Gierse held ASpade SuitJSpade Suit10Spade Suit9Club Suit, while Simao had ADiamond SuitQSpade SuitQHeart Suit2Spade Suit. The 3Club Suit on the turn gave Simao a gutshot wheel draw, but it was the AClub Suit on the end that saw him improve to the winning hand. His aces and fives with a queen kicker just edged out Gierse, locking up the pot and the title in the process. Gierse earned $424,122 as the runner-up finisher. This was his sixth final-table finish of the year, with two titles won and more than $2.5 million in POY earnings accrued along the way. With 3,468 total points, Gierse now sits in ninth place in the 2022 POY race standings.