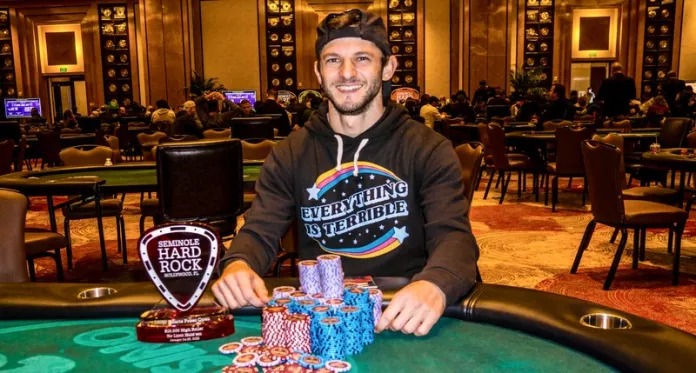 Jonathan Jaffe defeated a field of 93 entries in the massive 2022 Lucky Hearts Poker Open $25,500 buy-in no-limit hold’em high roller event, securing his second victory in this event after having come out on top back in 2020. In a way, Jaffe went back-to-back, as this event was not included in the schedule for the 2021 LHPO.

This time around Jaffe earned $574,085 as the champion, the second-largest payday of the 34-year-old professional poker player’s career behind only his runner-up showing in the 2008 World Poker Tour World Poker Finals main event for $670,635. The 2014 WPT Montreal main event champion now has just shy of $5.5 million in live tournament earnings to his name.

“I definitely ran the best I can ever remember running in a high-roller,” Jaffe told Seminole Hard Rock Poker Blog reporters after securing the win. “That’s kind of a peculiar feeling, when you keep winning all-ins from behind and your chips multiply, but you don’t feel like you did something particularly great.”

In addition to the title and the money, Jaffe also secured plenty of rankings points for the win. He took home 756 Card Player Player of the Year points, enough to move him into 11th place in the 2022 POY race. He also scored 344 PokerGO Tour points, good for fourth place on that leaderboard.

Jaffe entered the final table as the chip leader with 90- big blinds, with Daniel Colpoys in second chip position and bracelet winner Joseph Cheong in third.

2016 WSOP main event eighth-place finisher Jerry Wong was the first player to be knocked out at the final table, with third pair and a live straight draw failing to outrun the top pair and flush draw of Tim Capretta. Wong earned $66,615 as the ninth-place finisher.

A preflop race spelled the end of Vikenty Shegal (8th – $68,915), with his pocket nines unable to outrun the A-K of Colpoys. Sameer Batra was the next to fall. His middle pair was bested by the top pair of Cheong, and when no help came on the river, Batra hit the rail in seventh place ($80,400).

According to the event’s live updates, Caleb Piderit won his way into this high roller event via a $2,650 satellite. He managed to turn his seat in this event into career-best cash of $98,775, with his run coming to an end when his A-5 suited was unable to overcome the pocket nines of Capretta. Piderit’s previous top cash was for $7,520.

Capretta secured another elimination when his A-Q held against the K-7 suited of 2021 Wynn Winter Classic main event winner Eli Berg. The flop gave Berg a flush draw, but he was unable to improve to the winner by the river and settled for a $130,935 payday as the fifth-place finisher.

Colpoys got the last of his stack in with a three-bet squeeze holding K-J. Cheong had called the initial raise from Capretta with A-Q, and wasted little time in deciding to call after the opener got out of the way. Both players flopped a pair, but Cheong’s aces were best by the end. Colpoys earned $202,145 as the fourth-place finisher, the largest payday of his career.

Jaffe doubled through Cheong and then got involved in a preflop coin flip with the chip lead on the line. Jaffe held AClub SuitJHeart Suit facing the 7Heart Suit7Club Suit of Capretta. The board came down KDiamond SuitJClub Suit4Club Suit10Heart Suit and Jaffe’s jacks were enough to secure the pot. Capretta was awarded $291,730 for his third-place showing.

With that Jaffe took roughly a 5:4 chip lead into heads-up play with Cheong. The two agreed to make a deal to bring the tournament to a conclusion, with Jaffe earning $574,085 and the title as the chip leader, while Cheong took home $540,000 as the runner-up.

This was Cheong’s third POY-qualified final-table finish of the year. With 1,094 total points and more than $610,000 in year-to-date POY earnings, he now sits in second place in the overall standings.

Here are their final payouts, along with the other final tablists: