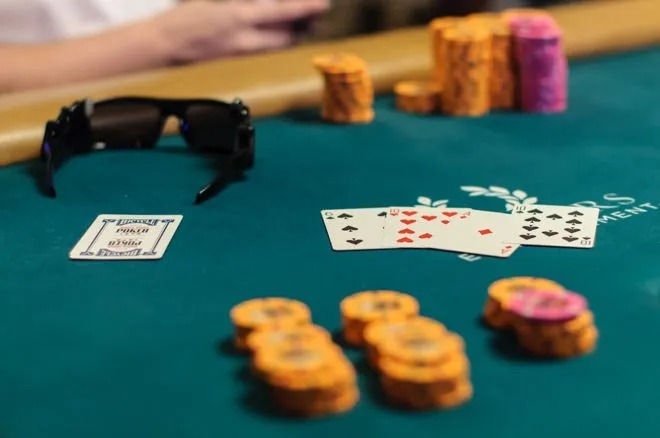 For many no-limit hold’em players, pot-limit Omaha is a logical next game to try.

On the surface, PLO plays similarly to NLHE. It’s also a “flop” game with five community cards, the same number of betting rounds, and small and big blinds.

Unlike other fixed-limit variants, PLO is also considered a “big bet” game like no-limit hold’em, although the size of your bet is limited by how much is in the pot (hence “pot-limit”).

However a big, obvious difference between the games is the fact that in PLO you are dealt four hole cards instead of two, and you must make a five-card poker hand using exactly two of your hole cards and three of the community cards. That difference greatly affects hand values and the importance of draws in PLO. Indeed, oftentimes having the nuts on the flop isn’t enough in PLO — you also want to have redraws to better hands should the action continue onto further postflop streets.

But that’s just scratching the surface of the differences between pot-limit Omaha and no-limit hold’em. Here are five important ones:

1. No huge favorites preflop in PLO
If you go all in before the flop in no-limit hold’em with {A-}{A-} and get called by a player holding {K-}{K-}, you’re a huge favorite to win the hand (better than 4-to-1). In fact, with pocket aces you’re a big favorite over any other hand in a preflop all-in situation. There are many other situations in NLHE where one hand dominates another, too.

Such is usually not the case in pot-limit Omaha, where even the best starting hand is often only 60-65% to win versus even mediocre four-card starting hands.

2. You have to make better hands in PLO
With four cards each player has six different two-card combinations from which to choose in PLO in order to make a five-card poker hand. That changes hand values dramatically, since all of those combos mean there are many more hands to beat than is the case in no-limit hold’em.

Making two pair or a straight often is going to be the best hand in NLHE, but in PLO such hands can be vulnerable to better ones. Especially if the board pairs or three cards of the same suit appear among the community cards, you can often count on someone having better than two pair or a straight.

3. Drawing hands can be favorites over made hands in PLO
Perhaps one of the least obvious differences between NLHE and PLO to those who are new to pot-limit Omaha is the fact that drawing hands can sometimes be overwhelming favorites over made hands after the flop. You might even flop the current nuts and be an big underdog with two cards to come.

Say you have {10-Clubs}{10-Spades}{9-Clubs}{2-Spades} and the flop comes {Q-Hearts}{J-Hearts}{8-Clubs}, giving you a queen-high straight. You shouldn’t get too excited, though, as a player with a flush draw and draw to a better straight might actually have you crushed. Someone with {A-Spades}{K-Hearts}{10-Hearts}{7-Spades} would be nearly 63% to win against you if the two of you got all the chips in on that flop!

4. Pot-limit betting means more postflop poker
Another significant difference between PLO and NLHE has to do with the pot-limit betting format. Unless a player is short-stacked, no one can simply open-push all in before the flop in PLO. Rather there often has to be at least a raise and reraise first — and perhaps even more raising — before anyone can get all in.

As a result, you’ll find a lot of players sticking around before the flop, willing to call a raise and see what develops. NLHE players accustomed to playing with short stacks and not having to make many postflop decisions can find PLO challenging since so many hands demand players have postflop skills. The increased complexity caused by the four-card hands also makes it harder to narrow ranges in PLO for some NLHE players.

5. Position is more important in PLO
Because of all the factors listed above, position is often more important in pot-limit Omaha than in no-limit hold’em. Having position gives you extra information when acting — namely, knowing what your opponent has chosen to do first. It’s an advantage in most forms of poker, but especially so in PLO.

The pot-limit betting makes it harder for a player acting first to push opponents out of pots, while it also helps the in-position player control the size of the pot that much better. The player who has position can check behind or call bets with medium-strength hands that have the potential to draw to better ones. Thus can the in-position player often lose less and win more. Many experienced PLO players are much less willing to call raises from the blinds or get involved from early position even with strong starting hands when compared to NLHE.

A few summers back, we asked Daniel Negreanu at the World Series of Poker what advice he would give no-limit hold’em players wanting to jump into a PLO event. Hear what he had to say:

There are still more important distinctions between PLO and NLHE, including how the games tend to play (PLO can be a lot looser) and the difference in variance (greater in PLO).

For those of you who play both no-limit hold’em and pot-limit Omaha, what are the biggest differences between the games in your opinion? Let us know in a comment below.